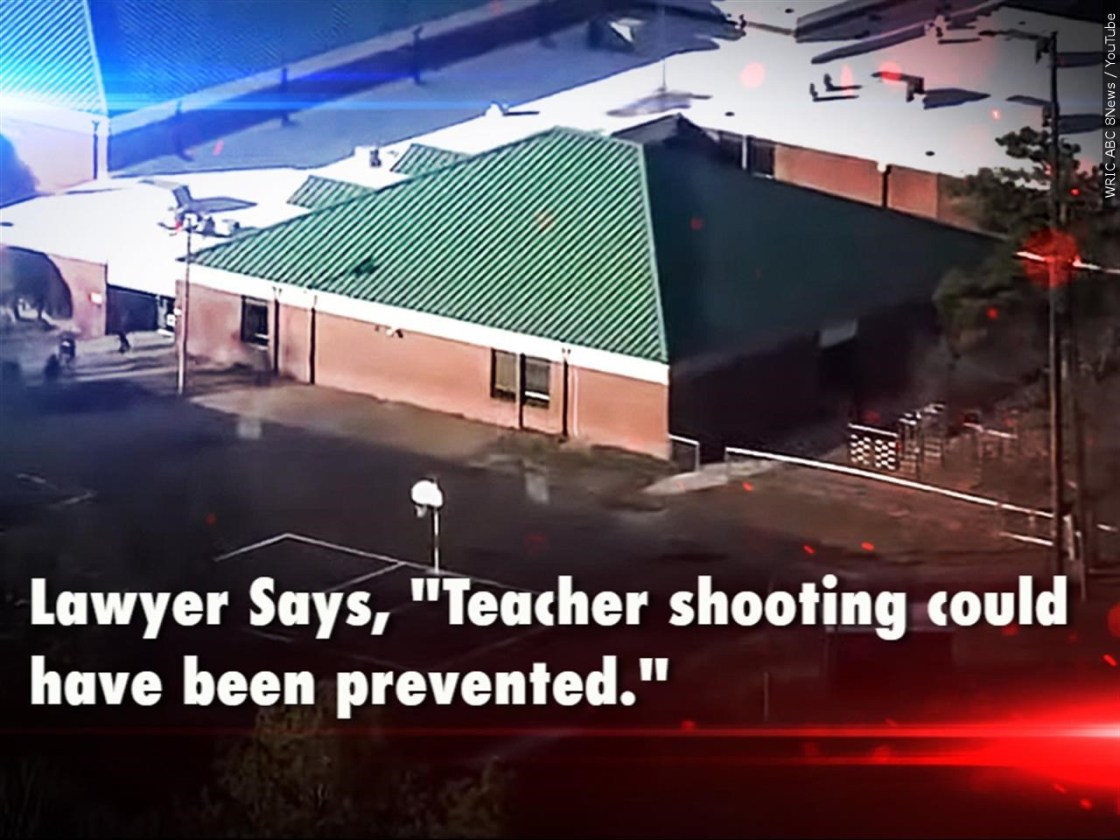 (CNN) — Administrators at the Newport News, Virginia, elementary school where a teacher was allegedly shot by a 6-year-old earlier this month were warned the day of the shooting that the child had a gun, according to the teacher’s lawyer.

“Over the course of a few hours, three different times — three times — school administration was warned by concerned teachers and employees that the boy had a gun on him at the school and was threatening people,” Diane Toscano, an attorney for the teacher, Abby Zwerner, told reporters in a news conference Wednesday. “But the administration could not be bothered.”

“Abby and these other teachers at Richneck Elementary School tried to do the right thing on January 6,” Toscano said, adding she intended to file a lawsuit on Zwerner’s behalf. Toscano alleged the administration “failed to act” despite the fact they had “knowledge of imminent danger.”

The school’s assistant principal resigned Wednesday, a spokesperson for the school district told CNN. Dr. Ebony Parker’s resignation comes ahead of a school board meeting Wednesday night that will include a vote on whether to oust the district’s superintendent following the shooting nearly three weeks ago.

CNN has reached out to the school district for comment on Toscano’s claims.

A 6-year-old boy was taken into custody January 6 after he brought his mother’s legally purchased gun to the school in his backpack and shot his first grade teacher, Abby Zwerner, police said at the time.

Zwerner, 25, was initially in critical condition and later stabilized before being released from the hospital after a bullet went through her hand and into her chest inside her classroom. Police have said the shooting was intentional.

According to Toscano, a bit before 11:30 a.m. that day, Zwerner informed an administrator that the 6-year-old had “threatened to beat up another child.” Administration did not remove the student from class or call security, Toscano claimed.

Around 12:30 p.m., another teacher told the administrator she believed the student had put a gun in his pocket and taken it out to recess, Toscano claimed. The administrator allegedly “downplayed” the possibility, Toscano said, responding that the boy had “little pockets.”

Then, shortly after 1 p.m., a third teacher told administrators that another child — described by Toscano as “crying and fearful” — had informed the teacher the 6-year-old “showed him the gun at recess and threatened to shoot him if he told anybody.”

A fourth employee then asked the administration for permission to search the boy but was denied, Toscano claimed.

Zwerner was shot almost an hour later, her attorney said.

The family of the 6-year-old continues to “pray for Ms. Zwerner and wish her a complete and full recovery,” an attorney representing the family told CNN in a statement Wednesday. “Our hearts go out to all involved.”

School board to vote on whether to oust superintendent

Since the shooting, the school board has had several meetings, including a heated one last week where members faced backlash from parents. The school board also met in a closed discussion Tuesday after which they decided to host a special meeting Wednesday.

Members are slated to discuss — and likely approve — in Wednesday’s meeting a separation agreement and severance with Superintendent Parker, according to the agenda posted on the school board’s website.

Board members are also planning to discuss the appointment of an interim superintendent.

CNN has reached out to Parker’s office for comment.

The school will reopen January 30, nearly a month after the shooting, school officials confirmed to CNN in an email earlier this week.

During the intense board meeting with parents on January 17, emotions were high as frustrated parents spoke about the fear and anxiety their children have been enduring since the gun violence. At least one parent called on the superintendent’s position to be reevaluated.

“Why did it take negative national attention before you took this seriously and actually reevaluated?” the parent asked. “I think it’s time the citizens and parents of Newport News who did not elect you to reevaluate your services as our, our superintendent.”

The shooting came as America continues to grapple with the ubiquitous issue of gun violence permeating many public spaces around the country.

The shooting at Richneck Elementary was the first of 2023 at a US school, according to a CNN analysis. In 2022, there were 60 shootings at K-12 schools, the CNN analysis shows.

Still, school shootings by a suspect so young are very rare.

There have been three other cases in which the suspect was as young as 6: in 2000, 2011 and 2021, according to the K-12 School Shooting Database, which has tracked shootings in American schools since 1970.

The shooting at the elementary school happened after an altercation between the teacher and the student, who pointed the gun at the teacher and fired a single round, said Newport News Police Chief Steve Drew.

“There was no physical struggle or fight,” Drew said at the time, adding no other students were involved.

The boy was placed under temporary detention order and was evaluated at a local hospital.

Nearly two weeks after the shooting, the boy’s family released their first statement, expressing praise for the teacher.

“Our heart goes out to our son’s teacher and we pray for her healing in the aftermath of such an unimaginable tragedy as she selflessly served our son and the children in the school,” the family said in the statement released through attorney James Ellenson.

The family pointed out their son suffers from a disability, and he was receiving care at the school.

“Our son suffers from an acute disability and was under a care plan at the school that included his mother or father attending school with him and accompanying him to Class every day,” the family statement says.

The family also said the gun allegedly used was secured before the shooting. They said a family member usually went to class with him, but not the week of the shooting.

“We will regret our absence on this day for the rest of our lives,” the family statement said.

Meanwhile, the police chief has indicated the boy’s mother could possibly face charges in the shooting.

“And at the end of the day, when that’s all compiled together and the facts and what the law supports, the Commonwealth’s attorney will make the decision if there are any charges forthcoming … towards the parents,” Drew said.

Correction: A previous version of this story misstated what Abby Zwerner warned school officials about. She warned them the student had threatened to “beat up” another child.