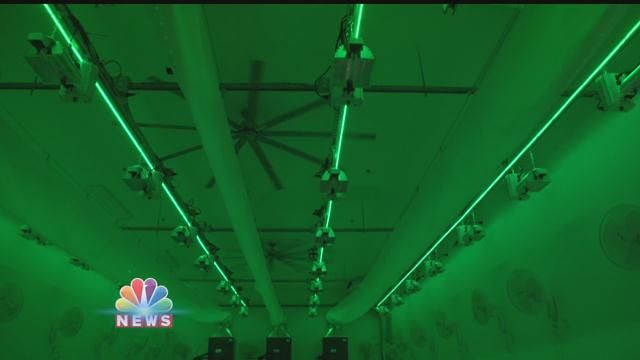 The city of Desert Hot Springs is gearing up for an infusion from a new cash crop: marijuana.

The city has attracted national attention for it’s new rules about growing pot, and today is a milestone in the city’s green future.

The first cultivator, or grower, of marijuana turned on their lights.
The plants are being moved in Monday, and that’s just the beginning.

The mayor of Desert Hot Springs says they’re processing applications from about 50 developers, and about 20 are already approved.

"It seems very logical considering the change in laws that are coming about, despite the fact the federal government has complete disapproval of them," said Ray Harkleroad of Desert Hot Springs.

Love them or leave them, Desert Hot Springs voted in 2014 to allow the city to tax marijuana cultivation — bringing in a booming business.

"We’re actually the first city to put the ordinances together in state of California to move forth on this industry," said Mayor Scott Matas.

The industry is expected to bring in a lot of green.

"This is going to create thousands and thousands of jobs, raise the median income of this town, but for we who are in the industry, to have a home, to be supported, to be embraced, to bring our product to the world is a phenomenal opportunity," said Canndescent CEO, Adrian Sedlin.

Canndescent is the first cannabis cultivator to begin growing here, but dozens more are looking to follow.

Some residents worry about crime, but Sedlin says they spent a quarter million dollars on security.
"One of the bank vault doors, this is actually for the server room, our ip address is published directly to the Desert Hot Springs police department."

There’s no cap on  the number of cultivators in the city.
They just have to be in the light industrial zone.

Canndescent plans to expand their facilities further.
"This is more of a fulfillment of an idea, I just knew this was going to happen, so it’s nice to cross that bridge, but now it’s on to the next," said Sedlin.

A grand opening will be in two weeks, on September 29th.

They plan on offering to pre-pay this years cultivation taxes as a way to thank and help the city of Desert Hot Springs.