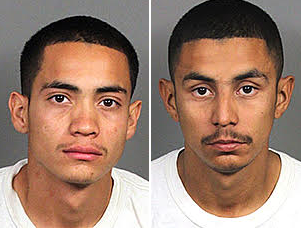 On Sunday, February 19, 2017, at approximately 7:00 p.m., deputies from the Riverside County Sheriff’s Department responded to a report of an assault with a deadly weapon within the Riverside County Date Festival property located in the 46-200 block of Arabia Street, in the city of Indio.

Deputies who were working at the festival, quickly responded to a report of injured people and located four adult male victims suffering from apparent stab wounds. All four victims were transported to a local area hospital and treated for non-life threatening injuries.

On March 17, 2017, members from CVVCGTF served a search warrant at a residence located in the 45500 block of Monroe Street, within the City of Indio and arrested Christopher Benavidez for assault with a deadly weapon. Also, arrested during the search warrant was Jose Benavidez for an outstanding arrest warrant and being a convicted felon in possession of ammunition.

Both Jose and Christopher Benavidez were booked into the Riverside County jail, located in the City of Indio.

This case is still ongoing and anyone with additional information regarding the incident is encourage to contact Gang Task Force Officer James at 760-836-1720.