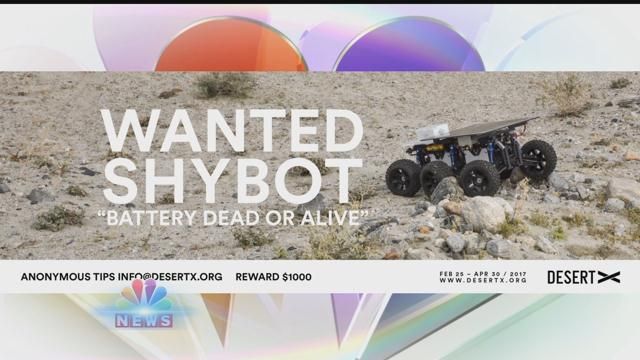 "She could have been bot napped."

Shybot, a robot designed to roam the desert and avoid human contact, can’t be found. 20 billboards have been posted in LA, Orange County and San Diego.

"She might have got stuck; she mights have flipped and her solar panels are facing downward."

She’s part of Desert X: a temporary art instillation tucked away across the Coachella Valley. Desert X has gained international attention from the art community, tourists, locals and social media savvy when the free exhibition began.

Neville Wakefield, the curator of Desert X, spoke to KMIR news about the missing bot. "The speculation is someone with some kind of technical know how got hold of her."

Desert X is offering a one-thousand dollar reward for the return of ShyBot- no questions asked.

While one art instillation is missing, "Third Place" is closed down in Desert Hot Springs.

"It is not officially open or in the state in started out in; I think people are curious to see it," said Wakefield.

In fact Richard Prince’s pieces have a history of interesting ends.

"One was in LA, that one was bulldozed," explained Wakefield. "The other upstate was struck by lightning."

The artists behind Desert X don’t consider the disappearance or closure to be a set back.

"People wanted it so they took it and then that process became accelerated slightly faster than we thought it would be," said Wakefield.

Desert X exhibits are one display till April 30th.