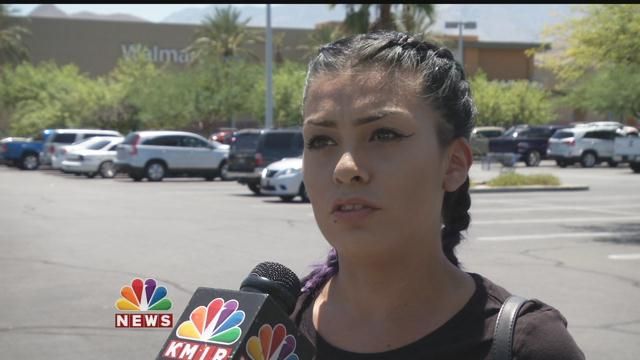 The man who was arrested at a Palm Springs Walmart, after police say he exposed himself to a little girl, has been identified. Police arrested 25 year old Tyler Ray Berthoud following the incident. He’s now charged with performing lewd acts with a child under the age of 14 and false imprisonment. This arrest came just a day after he was convicted and released from jail for sexual battery.

Andrea ponce, a close friend of the victim’s family, was inside of the Palm Springs Walmart on Ramon when the incident happened. She told us she was with the girl’s mother minutes before the piercing scream erupted in the bathroom and says it’s a day she will never forget.

"She heard the scream and she was like oh my god, I hope it’s not my daughter and she ran in and found her daughter crying…"

This after a man allegedly exposed himself to the 13 year-old girl.

"When she screamed there were 4 or 5 people in there that had seen him so they knew they had the right guy."

"He had peeked his head over the stall and she was using the restroom and what he did was he crawled underneath the stall, he exposed himself and he was playing with himself and she screamed."

All this happened in a matter of minutes.

"Her daughter had to go to the restroom so she said, you know go ahead and I’ll meet you there. And she was literally in the bathroom for not even two minutes when she walked up and heard her daughter scream."

The bizarre part about this is that Berthoud seemed unfazed with it all.

"He was walking out fine like normal…he was like I didn’t do anything…I don’t know what you guys are talking about."

And she told us he didn’t try to abduct her or anything.

"He was just trying to do his business in front of her."

Something that doesn’t make things any easier for the young teen and her family.

"She’s old enough to understand what happened and that it wasn’t right so she is going to have to be dealing with that for a while, her and her family. It’s going to be really rough for them for a while."

As for Ponce, she says this is a night she’ll never forget.

"was heartbreaking….i went home and even my sister was getting her hair done i work here and we both cried it;s something you;re not use to seeing at home so close to home. I mean you hear about it on the news but it’s just sad"

Berthoud was arrested and booked a day prior to this incident for misdemeanor charges and child annoyance down in Wildomar where he tried to pick up two teenage girls outside of a McDonald’s. After being released, he was required to register himself as a sex offender but failed to do so. He is being held on a $55,000.00 bail and is expected to face a judge Friday morning.