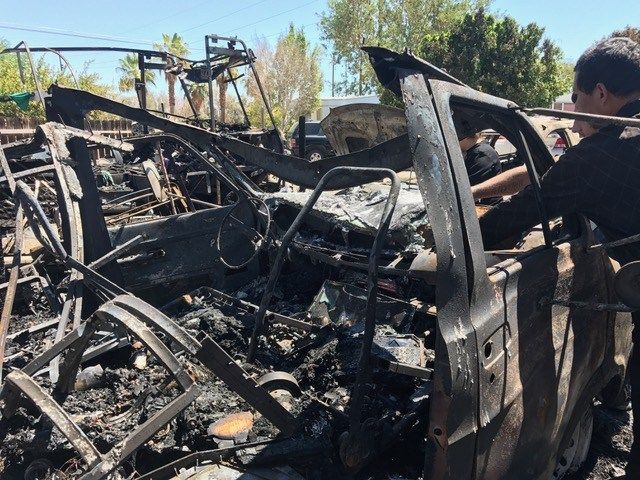 An Indio couple went out to start their RV this morning, and one of them ended up with second and third degree burns. The fire then spread to six other mobile homes nearby.

The fire started around 6:45 AM at Elm’s Mobile Park in Indio and because of it 10 people have been displaced.

"I smell like gasoline and everything, and then I go outside and see a car on fire," said Mario Guzman, a next door neighbor.

Guzman lost everything in the fire. He said within a matter of seconds his place was also up in flames.

"I was right there. Sleeping right there. I saw everything," Guzman said pointing to where his bed used to be.

According to neighbors, a man and woman tried to start their vehicle, and that’s when it burst into flames.

"She suffered some burns to her arms and so did he, and they’re both being seen at local hospitals," explained Battalion Chief Mark Oakley with Cal Fire.

Some neighbors even witnessed the woman on fire.

"She dropped, stopped, and rolled and the fire was getting bigger and bigger," said Luis Meza, who lived in the burned down trailer home.

Fire fighters said what the couple were doing was dangerous.

"It sounded like she was trying to pour gasoline into the carburetor while he was starting it. The vehicle back fired and then caught on fire," said Battalion Chief Oakley.

The most important thing Guzman lost in the fire was his memories.

"I have good memories right here with my little kids," he said.

Even his savings and valuables were burned to a crisp. He said he’s angry, but staying strong.

"The only thing we can do is find a place and see what’s going to happen with my trailer," he added.

The Red Cross was on scene helping those displaced. Fire fighters say the man and woman who suffered burns are expected to be okay.