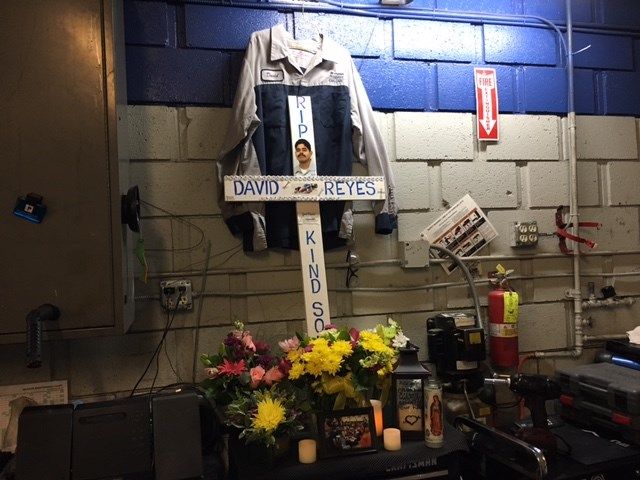 A service technician who was shot in Cathedral City on Sunday and died this week was honored with a memorial at his work station at Palm Springs Hyundai.

"Me and David were close co-workers. We had a bond," said co-worker Fernando Garza.

At first, co-workers of 26-year-old David Reyes were in disbelief.

"I wasn’t thinking straight when they told me that. I was like no, you’re playing around with me. Nah, I don’t believe you," said Garza.

"it’s been tough around here all week. Walk in the garage and seeing grown men wrenching on cars with tears in their eyes. Yeah, it’s just tough," said co-worker Paul Thompson.

Reyes was a service technician at Palm Springs Hyundai. He was shot outside of the Outpost Market in Cathedral City.

"We had to do something to honor him and we decided, his tool box, his stall where he worked everyday. We wanted to put a little memorial for him so we would walk by it every day and see him and respect him," said Thompson.

Those who worked alongside Reyes describe him as a model co-worker.

"David, well, he did everything around here. He was a technician here but he did parts as well. If the was bay is backed up, he’s out there washing cars. He sees a light bulb burned out he’s grabbing a latter and changing a light bulb," said Thompson.

"He was an outgoing person. Helpful. He liked helping a lot of people," said Garza.

The help he offered others quickly gained him a reputation.

"We called him doctor Dave around here…he liked to diagnose everyone’s injuries. You know in the auto shop, everyone is getting hurt so he kind of got the nick-name of doctor Dave."

"We talk about it all day everyday. Trying to figure out what in the world happened and why it happened. Especially why to him, why to a guy like him," said Thompson.