D.A.C.A. Student Hopeful Washington Deal Will Save Thousands Like Him From Deportation 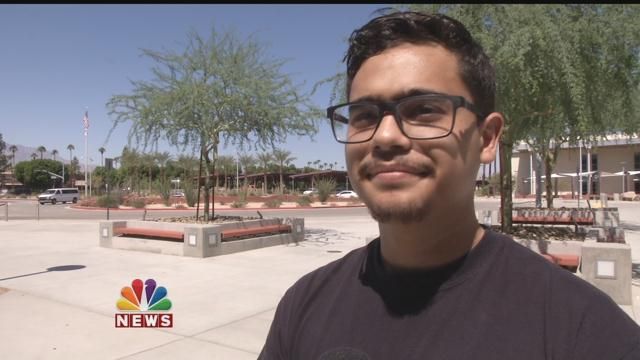 "Sorry," says Elias Hernandez. He breaks down as he thinks about the sacrifices his parents made when they came to America from Mexico, "They left everything for us."

They brought him here illegally when he was five-years-old. Until now he wasn’t afraid of deportation because he’s one of 800,000 protected by the Deferred Action for Childhood Arrivals or D.A.C.A. immigration policy. In fact, it wasn’t until he was trying to apply for college he found out he wasn’t an American citizen.

He says he went from fitting in, "I felt included, I felt there was no division," to feeling afraid, "targeted, I was always scared that one day my parents would get stopped."

Counselor Jose Simo says it was a dark day when students like Hernandez who attend College of the Desert heard president trump rescinded D.A.C.A., "September fifth, of course the worst news that a lot of us could have heard."

Hernandez says for the first time in a long time he thought about what it would be like to live in a country foreign to him, "If I went back to Mexico would be considered an American and I wouldn’t fit in over there."

But Simo says the enormous support that followed has led to the  president publicly supporting D.A.C.A. recipients and a potential deal  to permanently restore it, "It’s almost like a sleeping giant was awakened and the amount of support that just came out of this I think is what’s driving the new political climate."

Hernandez says hope now outweighs his fears, "It’s not certain and I’m hoping for the best I mean it did make me happy that the president is trying to change his mind and I’m looking forward for him to make something official."

And while there’s a lot of back and forth whether or not a border wall or citizenship should be part of the deal, Hernandez says he’s torn about what the real cost of D.A.C.A. could be, "It’s a very tough choice, I mean for me it would be good but for other people, I mean the funding could go to better use, like funding to rebuild places hit by the hurricanes."

But for now all he can do is hope what ends up being official reflects how he feels in his heart, "I feel like I am an American.