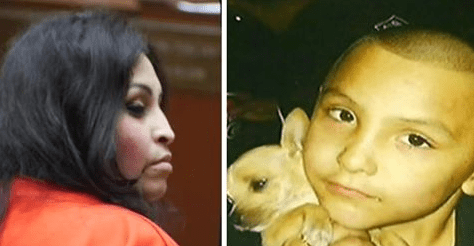 The mother of an 8-year-old Palmdale boy who was routinely beaten, starved, forced to sleep in a closet and tortured until his 2013 death pleaded guilty Thursday to a murder charge.

Under the terms of a plea agreement, 34-year-old Pearl Sinthia Fernandez is expected to be sentenced to life in prison without the possibility of parole for the killing of her son, Gabriel. She pleaded guilty to first-degree murder and admitted a special circumstance allegation of murder involving torture.

A sentencing hearing was scheduled for June 7.

At Thursday’s hearing, Pearl Fernandez appeared to tap her right foot and answered questions in a soft, meek voice. At one point, a bailiff brought a box of tissues to someone who was sobbing in the courtroom.

Fernandez’s boyfriend, Isauro Aguirre, 37, was convicted last year of the same charge and special circumstance allegation, and jurors recommended that he be sentenced to death. He is scheduled to be sentenced March 8.