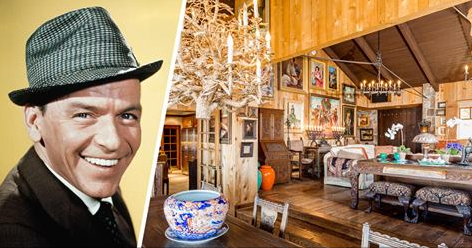 For more than a year now, the rustic retreat has sat on the market with a price tag of $3.9 million. According to the listing, the price has been reduced to $3.69 million

When Sinatra put down roots in a rocky landscape just outside of Palm Springs, he did it his way, designing the rustic retreat fit to entertain a long list of celebrities and dignitaries. Nearly 50 years later, Ol’ Blue Eyes’ desert hideaway in the mountains above Palm Desert has been listed with surrounding land parcels included. The Los Angeles Times reports the current homeowners, who knew the legendary singer from his days performing in Las Vegas, have meticulously maintained and restored the 1967 compound Sinatra named Villa Maggio.

The lavish estate, which sits on 7.5 acres, is comprised of three separate houses with a total of nine bedrooms, 13.5 bathrooms and nine fireplaces. Head outdoor and there is a helipad, swimming pool, tennis court and dance floor, where we can only imagine the crooner and his Rat Pack pals put on a show for guests.