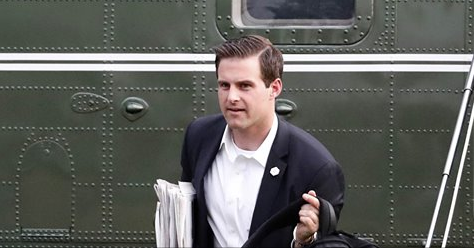 President Donald Trump’s longtime personal aide John McEntee has been fired and is under investigation by the Secret Service for serious financial crimes, according to two federal law enforcement officials.

McEntee’s security clearance had been "in limbo for some time," one of the officials added.

His firing marks yet another departure in an executive office marked by a revolving door of hirings and firings and plagued by issues obtaining security clearances.

McEntee is one of three government officials to be fired this week, including Secretary of State Rex Tillerson who was dismissed with a tweet on Tuesday morning, and Under Secretary of State Steve Goldstein, who, according to a White House official, was removed for contradicting the account of Tillerson’s dismissal.

McEntee will take a job with Trump’s re-election campaign, the campaign said Tuesday morning. The campaign did not respond to a request for comment on the Secret Service investigation.

The Secret Service investigates a range of crimes, including credit card fraud, counterfeiting, financially oriented cybercrimes and child pornography, as well as threats.

He was one of the president’s longest-lasting aides and present for some of Trump’s biggest moments this year, including last week’s surprise announcement of planned talks with the North Korean leader, Kim Jong Un.

"We’re not going to comment on a personnel issue," a senior White House official told NBC News about McEntee’s firing on Tuesday. CNN first reported that McEntee was being investigated for serious financial crimes.

The top Democrat on the House Oversight Committee, Rep. Elijah Cummings of Maryland, asked the White House on Tuesday for more details and documentson the administration’s process for vetting McEntee and others.

“I have been warning for more than a year about the White House’s deficient background check process,” Cummings wrote in a letter to chief of staff John Kelly.

He also complained that the White House had not properly responded to previous bipartisan requests for information on the clearance process, includingthose pertaining to former staff secretary Rob Porter, who resigned after allegations of domestic violence came to light.