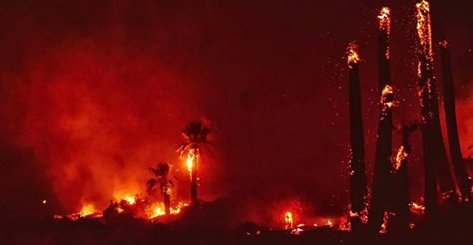 The fire that broke out late Monday damaged the Oasis of Mara, a site settled by Native Americans who planted the 29 palm trees that inspired the name of the nearby city Twentynine Palms, according to the National Park Service.

Strong winds stoked the rapid spread of the fire, which was contained at less than a square mile, Eric Sherwin said, a spokesman for the San Bernardino County Fire Department.

Photos show multiple trees ablaze as firefighters fought to snuff out the flames in less than an hour.

The fire is being investigated as an arson, the National Park Service said. No arrests have been made.

The agency did not describe the extent of the damage, saying that a full assessment still needed to be conducted.

Steve Raines, a longtime Twentynine Palms resident and a professional photographer, was in the area when a friend texted him that the Oasis of Mara was on fire.

Raines raced to the scene to take photos.

"It’s significant damage," Raines said. "And it looks like it’s going to be damaged for a long time."

The Serrano people settled the oasis, naming it Mara, "the place of little springs and much grass." Located near Joshua Tree’s headquarters and a bustling visitor’s center, the oasis is among the first sites for the millions who visit the park every year.

Raines said it was tough to watch the oasis burning.

"It’s a piece of history," he said. "It’s always heartbreaking seeing something like that go up in flames."