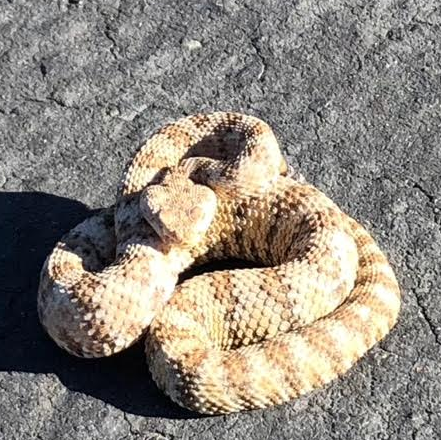 In the last 24 hours, Desert Hot Springs Police and Animal Control have responded to two separate calls reporting rattlesnakes spotted by residents in the northeastern section of the city.

In both instances, rattlesnakes were caught by officers and returned to their nearby desert areas. With the rising springtime temperatures, desert snakes are becoming more active and may be found basking in the morning sun. As the temperature increases during the day, they may seek shade from the afternoon heat. Often, snakes seek refuge under debris near homes, under cars, or even under bushes or rocks in residential yards. In the evening when the temperatures cool, the snakes will be on the move and seeking a meal.

With this in mind, please be careful where you place your hands and feet when you cannot see where you are reaching, and keep an eye on children and pets. Many times, rattlesnakes will not alert with their tell-tale rattle, and instead stay still and quiet hoping you will leave. Baby snakes will typically have only one small button which may not be readily obvious and can be very quiet.

The most commonly encountered venomous snake in our area is the Speckled Rattlesnake. Both snakes relocated recently were juvenile speckled rattlesnakes with very small rattles. Rattlesnakes have no interest in human interaction and will hide or flee when given the chance.

The vast majority of bites are on the hands due to trying to handle or provoke a snake. In the event you encounter a snake, do NOT attempt to handle it. Call Desert Hot Springs Police/Animal Control Dispatch at (760) 329-2904 so they can be safely removed.