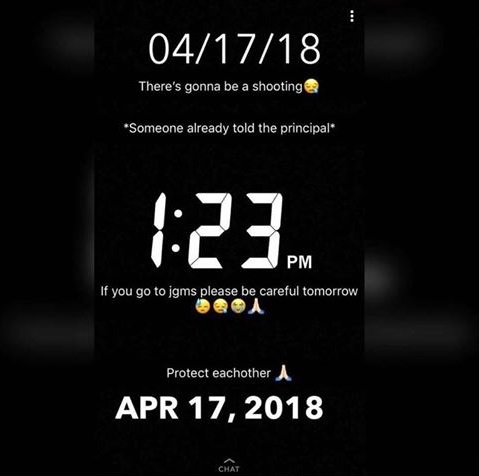 The second school-shooting threat on social media has surfaced in just a week.

Tuesday night, some parents in the East Valley received a voicemail from the school addressing the apparent threat to John Glenn Middle School in Indio.

The apparent threat appears to be a Snapchat photo with the text: “There’s gonna [sic] be a shooting. Someone already told the principal. If you go to JGMS please be careful tomorrow.”

The picture also includes date stamps. It’s important to know these date stamps can be attached to any photo and don’t necessarily indicate when the original threat was made.

Extra precautionary measures will be taken by Desert Sands Unified School District to make sure students are kept safe April 18.

“Social media messages are being shared with students concerning a threat to John Glenn Middle School. Our ongoing investigation leads to the belief that this is a threat from the past. Indio Police and District Security are currently conducting an in-depth investigation. Both teams will be on campus tomorrow providing additional presence and support. We will meet students at the gate tomorrow as always and the John Glenn Middle School family will spend the day on what we do best: educating your children.”

Last week a threat surfaced on social media towards Desert Mirage High School in Thermal, threatening a shooting during a rally on Friday, April 13. No incident took place that day.

KMIR has not heard back from Indio Police Department. We will update this story as more information comes into our newsroom.