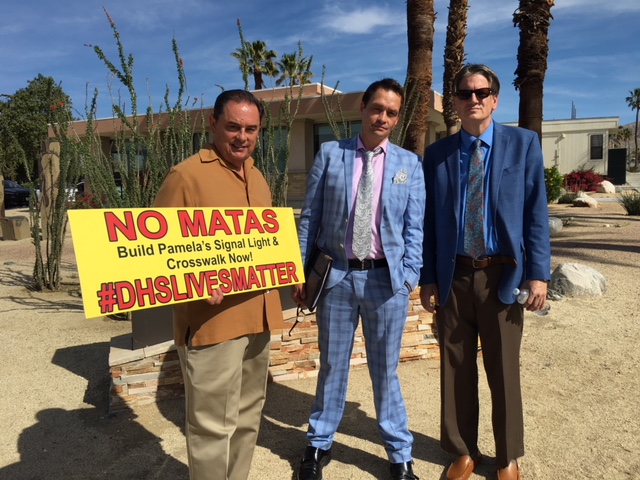 Community activists in Desert Hot Springs are speaking out against city hall, claiming the city is interfering with efforts to make a dangerous road a bit safer.

The sign read “NO MATAS” which is Spanish for “don’t kill” and called for a crosswalk to be put in where 17-year-old Pamela Carillo was struck and killed by a car.  Former desert hot springs mayor Adam Sanchez agrees.

“This is a death trap, it needs to be now because we don’t want anymore deaths in Desert Hot Springs,” Sanchez said.

An attorney for the man who paid for the sign, who is not related to the victim, is ticked off the city took it down from private property. Property that is outside Desert Hot Springs city limits.

“Number one they paid to have the sign prepared and put up, and the city just went across into county property and just took it away and that’s wrong,” said attorney Matthew Pappas.

“It had an inappropriate reason for taking it down and it needs to return that property. Otherwise we’re going to have to call the Sheriff’s Department because basically it is theft of the sign,” said Pappas.

Attorney Pappas isn’t the only one asking for change. After Carillo died, several of her friends and members of the community called for a crosswalk in an area where she was hit.

“You have a young woman that has died on the street. We have some statistics here showing it’s a dangerous area. It’s a half mile to the nearest crosswalk, it’s an issue,” Pappas said.

For now a stand-off between those who say they want a safer street and the city of Desert Hot Springs, which says it wants the same thing, but done in an appropriate way.