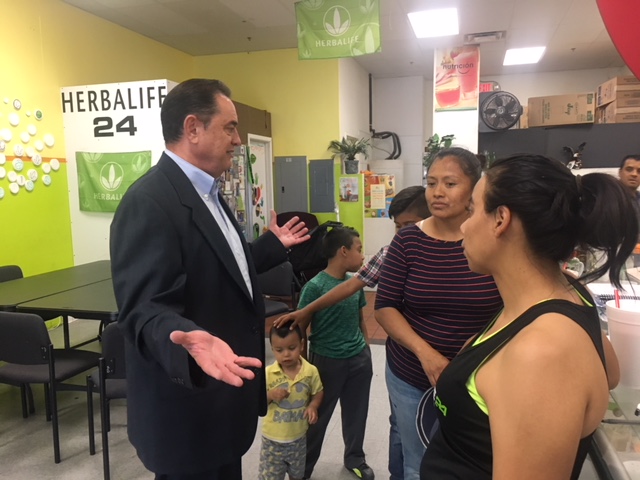 KMIR brought you an exclusive story Tuesday that unleashed a fury of comments on social media. The majority of the comments attacking former Desert Hot Springs mayor Adam Sanchez.

Sanchez attacked city hall Tuesday because the city has not put in a crosswalk where a 17-year-old Pamela Carillo was hit by a car and killed. Sanchez also took issue with the city after it removed a sign that called for a traffic signal in the area where Carillo was killed. The comments Sanchez made did not sit well with a lot of people in Desert Hot Springs.

The majority of the 200 comments, now removed from the Desert Hot Springs Neighborhood Facebook page, said Sanchez’s intentions are not what they appear.

“He is posturing because nobody else is supporting him,” said Desert Hot Springs resident Michael Picardi.

Sanchez said there are two sides to every story.

“It’s not true. I am there to help the people of the of the Mobile Home estates get representation and have a voice,” said Sanchez.

Many of the comments claim Sanchez is grandstanding for the upcoming election.

“The fact that he has come out of the woodwork, we haven’t seen or heard from him in the past two and a half years, and now he’s come out because there is an election in November, and all of a sudden he has appeared and forced himself into this situation,” said Picardi.

“It’s not true. The way I got involved as I just said was that the Mobile Home Estates contacted me and said how do we fix this major death trap that’s here,” said Sanchez.

“The family and the community where this happened is not standing behind him as you noticed yesterday,” Picardi said.

Others took to social media and questioned why Sanchez didn’t take issue with public safety during his tenure as mayor.

“This person was the mayor for two years, he was on the council for four years, and did absolutely nothing to improve the city as it’s being improved right now,” said Picardi.

“When I was mayor for two years, I spent a majority of my time of course, getting us out of bankruptcy, because it took two years,” said Sanchez.

“It makes me very angry, it also disgusts me that he’s using this poor girl’s death to benefit his political aspirations,” said Picardi.

Sanchez has called out the city for not using grant money to improve pedestrian safety on Palm Drive. But just over two months ago, city officials say the city council approved a plan that would see several lights, bus stops and sidewalks in the area where 17-year-old Pamela Carillo was killed.