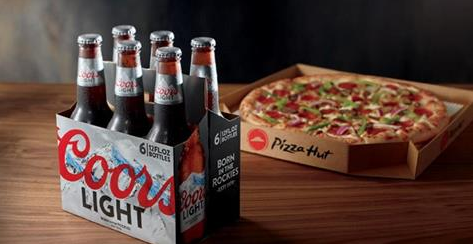 Pizza and Beer Delivery Has Arrived in California

Is there anything better than pizza? The answer, of course, is pizza and beer.

On Tuesday, Pizza Hut announced that it is launching a pilot program for 100 stores across California and Arizona that will allow customers to get delivery of hot pizza and cold beer.

“Nothing complements an oven-hot pizza like an ice-cold beer,” Pizza Hut CMO Zipporah Allen said in a statement. “In addition to our extensive delivery network, many Pizza Hut restaurants are already licensed to serve and distribute beer, without third party services, additional fees, or extended wait times. Expanding the pilot program is a natural way for Pizza Hut to get our customers the perfect pizza and beer combo they’re craving, delivered right to their doors.”

The pilot program comes in partnership with MillerCoors, so the beer selection is limited to six packs of Coors Light, Blue Moon and Miller High Life. The company also made a point to state that delivery personnel participating in the program will be equipped with custom coolers designed to keep the beverages cold. After all, warm beer is probably the only thing that could ruin the launch of such a basic, yet novel, idea.