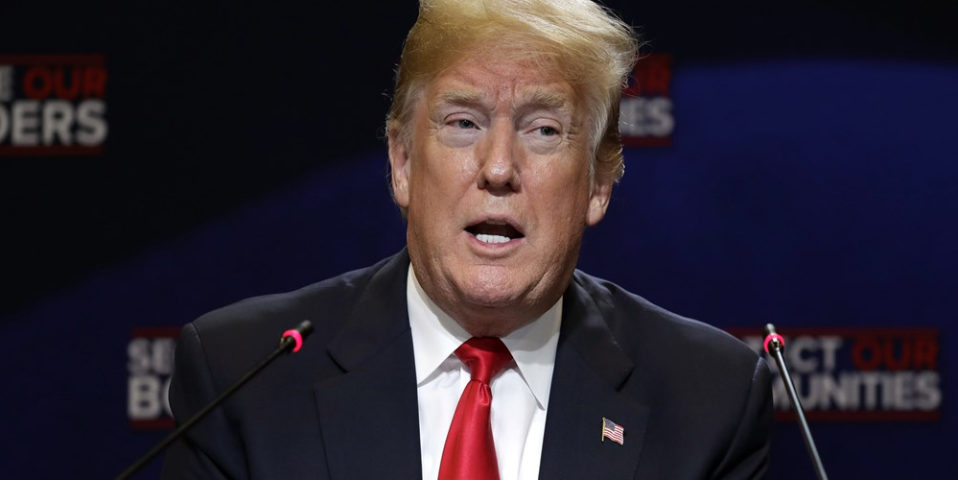 Taking a knee during the national anthem during a National Football League game should “maybe” be a deportable offense, President Donald Trump appeared to say in an interview that aired Thursday morning.

Speaking just moments after the NFL announced that all players who are on the field when the national anthem is heard before a game must stand and show respect — or can choose to remain in the locker room without penalty — Trump praised the new policy but also said it didn’t go far enough in punishing players who might continue to take a knee during the anthem.

“Well, I think that’s good. I don’t think people should be staying in locker rooms. But still, I think it’s good. You have to stand proudly for the national anthem, or you shouldn’t be playing, you shouldn’t be there. Maybe you shouldn’t be in the country,” Trump said in a wide-ranging sit-down with “Fox and Friends” that took place Wednesday but wasn’t aired until Thursday.

“You have to stand proudly for the national anthem, and the NFL owners did the right thing,” he added.

Under the new policy, teams will be subject to a fine if a player does not comply.

The NFL had previously suggested that players should stand, but it stopped short of enforcing fines. The new policy says clubs can still develop their own work rules for players and personnel who don’t stand, but they must be “consistent with the above principles.” That means teams could choose to pass along fines to players.

The controversy over players who kneel during “The Star-Spangled Banner” has raged since 2016, when Colin Kaepernick, then a quarterback with the 49ers, first refused to stand as a lone protest against police brutality, particularly against black Americans, and racial oppression. Protests expanded, prompting Trump to criticize the the kneeling as “disgraceful.”

Trump, in the interview with Fox, took credit for creating the issue but said it was “the people” who “pushed it forward.”

“I think the people pushed it forward, not me. I brought it out. it could have been taken care of when it first started,” he said.

“I’ve done done a great service for the country by firing him,” Trump claimed.

The president, who spoke to the network Wednesday following a roundtable discussion on MS-13 and immigration in New York, added that he would not consider an immigration bill that did not include provisions to build his border wall.

“Unless it includes a wall, I mean a real wall … there will be no approvals from me,” Trump said. He said he was “watching one or two” of the bills that are expected to be voted on in the House, following an expected forced vote process by moderate Republicans known as a discharge petition.

The petition would force a vote on bipartisan legislation unveiled in March that would allow for the consideration of four different proposals, including: a conservative immigration bill proposed by Judiciary Committee Chairman Bob Goodlatte, R-Va.; a bipartisan version of the Dream Act; and a bipartisan bill to protect people covered by the Deferred Action for Childhood Arrivals (DACA) program while enhancing border security.

Trump, however, said, “it’s time to get the whole package,” referring to his desire that any immigration deal include not only money for his wall and protections people covered by DACA, but also increased border security measures like ending so-called “chain migration.”