Six Months After It Started, California’s Largest Fire on Record is Officially Out 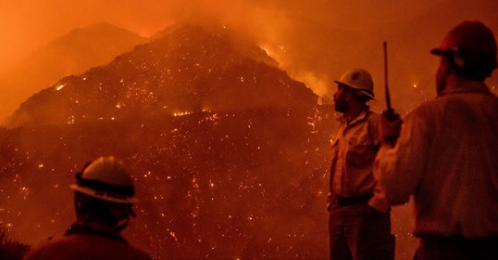 After months of putting out hot spots, the largest fire on record in California was officially declared out on Friday.

Los Padres National Forest officials said there have not been any hot spots detected in the Thomas fire burn area for more than two months, leading to Friday’s declaration. The devastating wildfire started Dec. 4, burning through 281,893 acres in Ventura and Santa Barbara counties.

Two people, including a 32-year-old Cal Fire apparatus engineer, died and more than 1,000 structures burned before the fire was contained Jan. 12. A fire is considered contained when flames are surrounded on all sides by some type of boundary, such as a fire line where vegetation has been removed. From there, a fire is considered controlled when there’s no further treat of it burning beyond containment lines.

The Thomas fire also contributed to a deadly landslide Jan. 9 in the seaside community of Santa Barbara. Hillsides stripped of vegetation by the fire gave way during an early morning downpour, unleashing a mudflow that killed at least 21 people.

Closure orders due to the fire were lifted May 24. Crews are still repairing roads, trails and fences damaged by the fire in Los Padres National Forest, where about 181,000 acres burned.

In the case of the Thomas fire, firefighters faced an enormous challenge due to strong and shifting winds, especially during the first 24 hours after the fire started in Ventura County. The fire flared up Dec. 10, burning nearly 61,000 acres in about a week.

It was part of a deadly and destructive year for wildfires in California. More than 40 people were killed and more than 11,000 homes were destroyed by wildfires in 2017. More than 9,000 fires burned 1.2 million acres across the state.

The significant increase in the numbers and size of fires last year was largely because the state was coming off one of its wettest winters in years in 2016-2017, which left hillsides covered in grass and other vegetation. That grass dried out in summer and turned into tinder, providing fuel for rapidly spreading fires often pushed by strong winds that can carry hot embers for miles and turn small spot fires into infernos.

An increase in the number of dead and dying trees also has exacerbated the wildfire threat, Cal Fire officials said.