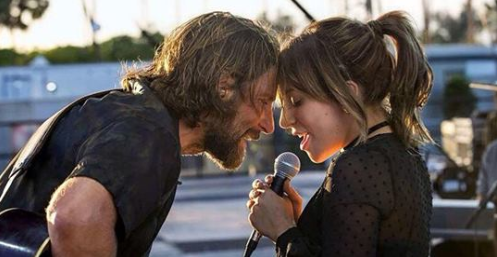 The first trailer for “A Star Is Born” is here.

The upcoming movie starring Lady Gaga and Bradley Cooper is set to hit theaters in October and now viewers are getting a first full preview of the musical remake. The trailer, dropped on social media Wednesday by the “A Star Is Born” movie Twitter account, shows Cooper as rockstar Jackson Maine. Cooper, who also directed the film, also sings in the trailer.

The preview also shows Jackson meeting Ally (Lady Gaga) and encouraging her to get up on stage and show off her powerful voice.

It was just last year that Gaga took to social media to express her excitement about her role in the movie.

“I am so excited to star in my first movie alongside someone I’m so lucky to call my friend. I always wanted to be an actress on the big screen. The story of ‘A Star is Born’ is so special and I’m so grateful to Bradley for making my dream come true,” she wrote in an Instagram post.

The “Million Reasons” singer also took to Instagram on Wednesday to talk about her experience making the movie.

“It’s a dream come true and an honor to be a part of this incredible movie,” she wrote alongside the film’s poster. “Bradley Cooper’s ability as a director, actor and musician is astounding. I can’t wait for people to see this authentic, epic, beautiful love story. It’s called ‘A Star Is Born,’ and I’m beyond thrilled for you to meet Jack and Ally.”

A Star is Born is set for release on Oct. 5.