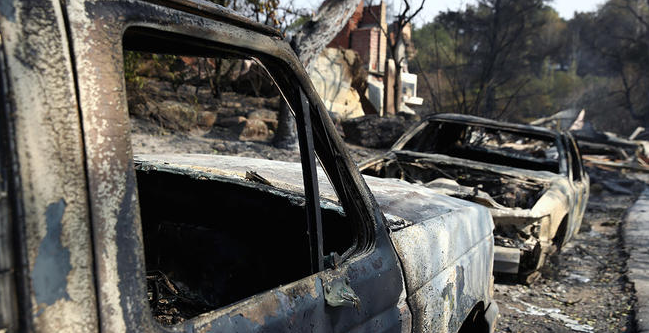 Officials completed a total of 12 investigations of more than 170 fires that burned at least 245,000 acres in Northern California. Nearly half of the fires were caused by a tree coming in contact with PG&E powerlines, CAL Fire said.

The fire agency said it believes eight of the fires could have possibly been prevented based on complying with utility law, including Adobe, Pocket and Atlas Fires.

More than 8,000 structures across Northern California’s wine country were wiped out by the fires, hundreds of thousands of acres were scorched and 44 people were killed as a result of the blazes.

Redwood Fire (Mendonico County):
Caused by tree of parts of trees falling onto PG&E powerlines, according to CAL Fire.

Sulphur Fire (Lake County):
Caused by the failure of a PG&E owned power pole, resulting in the power lines and equipment coming in contact with the ground, CAL Fire said.

Cherokee Fire (Butte County):
Caused by tree of parts of trees falling onto PG&E powerlines, according to CAL Fire.

37 Fire (Sonoma County):
CAL Fire investigators said they determined the cause of the fire was electrical and was associated with the PG&E distribution lines in the area.

Norrbom Fire, Adobe Fire, Partrick Fire, Nuns Fire:
These series of fires that merged in Sonoma and Napa counties were caused by a tree falling onto a power line, CAL Fire said.

Pocket Fire (Sonoma County):
CAL Fire determined the fire was caused by the top of an oak tree breaking and coming into contact with PG&E power lines.

Atlas Fire (Napa County):
At one location, it was determined a large limb broke from a tree and came into contact with a PG&E power line. At the second location, investigators determined a tree fell into the same line, CAL Fire said.