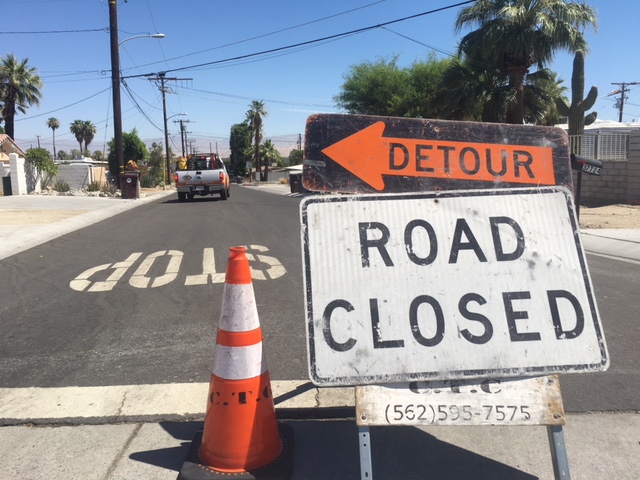 An entire neighborhood in the Cathedral City Cove is basically at the mercy of Southern California Edison while the utility works on a huge project in the area. Now people who live in the work zone say organization and communication is lacking.

As Southern California Edison works to upgrade an outdated system, residents of the Cathedral City Cove can only stand by and wait. Some of them doing so without power.

“It’s like I use to live 60 years ago. No television, no radio, no cell phone. How can I live?” said cove resident Bernie Bergman.

At least he received notice, which is more than some other residents in the neighborhood can say.

“Of this project we have not been notified whatsoever. All of a sudden they show up and they are out here digging up our driveway and side streets, etc.,” said cove resident Richard Roecker.

SoCal Edison says it did notify residents as best they could. By phone and by mail. But a rep from the utility says some phone numbers have changed, and sometimes, notifications get lost or end up in the trash. But those who did receive prior notice of the work say it didn’t happen when it was supposed to.

“Well they were supposed to do it last week, I guess they’re doing it this week. I didn’t get a second notice on this part,” said Bergman.

The work, Edison says, is crucial to getting the Cathedral City Cove neighborhood up to speed. The system in place now was put in before Edison was the utility provider in the desert. Some of the infrastructure could have been put in place before the 1950’s. The new system will accommodate more voltage, allowing residents to use power throughout the summer with fewer chances of an unscheduled power outage. People in the cove say they are willing to put up with the inconvenience.

“Maybe if they hadn’t done an upgrade who knows, it might have blown the power for a month,” said Bergman.

SoCal Edison says on days hotter than 105 degrees, it will keep planned outages under five hours. On days hotter than 113 degrees, Edison will cancel any planned outages under normal circumstances. But people in the Cathedral City Cove will need to be patient. Updating a more than 50-year-old system is going to take time. Edison says the work will probably not be completed until late fall.