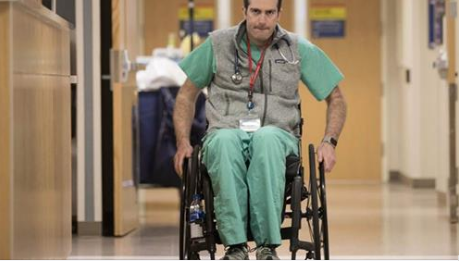 For Dr. Daniel Grossman and his close friend Ron Garber, biking has been their bond. It was their escape — their time to talk about life, love, even death. But during a mountain biking trip last Labor Day weekend, all of that changed in an instant.

On their final run in a northern Minnesota park, on a trail called “Easy Street,” Grossman took a fall, slamming him to the ground. He has no memory how it happened.

“I went up a little hill,” he said. “The next thing I know I’m on the ground with people hovering above me.” Grossman, an ER doctor at the Mayo Clinic in Rochester, Minnesota, couldn’t get up or feel his abdomen.

“I remember feeling a sort of band around my belly, sort of a numbness. And wondering if I could move my legs or if I could feel my legs.”

He tried to move them, but nothing was happening.

A helicopter whisked Grossman away to the ER, where a scan revealed a shattered vertebrae, causing irreparable damage to his spinal cord. Grossman was devastated. He knew he would never walk again.

“I’ve seen enough of those in the past. I know what that means when I see it,” he said.

But Grossman’s instinct to care for others would not be broken by the accident.

When he was lying on the ground waiting for the helicopter, he asked his friend Garber to call the hospital where he works. He was scheduled to cover a shift the next day for another doctor and he wanted to make sure it would still be covered. When Grossman describes the immediate aftermath of the accident, he talks about the support he received from friends and family, who dropped everything to be at his side.

“It was a pretty amazing experience to be surrounded by love and compassion,” Grossman said. “Having friends who are unconditionally there, who will cry with you, is incredible.”

BACK IN THE ER

He quickly came to terms with his new reality, resolving to be as independent and active as possible. “If you accept what’s happened, your primary goal is to learn how to live the most amazing life that you can from a wheelchair,” he said.

Grossman has learned to do simple things on his own, like get out of bed, shower and get dressed. He even learned to drive again.

But his main goal was getting back to the emergency room — as a doctor.

“I love being a physician. It’s the only thing I ever wanted to be and it’s part of my identity,” he said. “When I’m there I’m smiling all the time, ’cause I could have been dead. And instead, I get to practice medicine. I get to influence the lives of others. That’s an incredible feeling.”

He set a goal to be back at work within six months — and met it.

While Grossman admits that he’s not as efficient as he once was, he can still do all of his work.

In fact, Grossman says being in a wheelchair has made him a better doctor. At 6’5 he often towered above his patients, but now he speaks to them on their level.

“I hold their hand,” said Grossman. “The conversations have become much more intimate. I understand what they’re going through and I can relate when things are scary for them.” As remarkable as his story is, he prefers for people to see him as motivating, rather than inspiring.

“When people say it’s inspiring, I always wonder, what change have you made in your life as a result of hearing my story?”
For his biking buddy, Grossman’s accident was a chance to repay kindness. Garber’s young daughter, YaYa, had died from a rare genetic condition so biking with Grossman was therapeutic for his friend.

“Daniel was there for me during the hardest time in my life, so of course I would be there for him,” said Garber.

When Grossman was first brought to the hospital and received his diagnosis, Garber felt a crushing guilt over what happened. But Grossman wouldn’t allow it. “The first thing he said was ‘it’s not your fault, don’t blame yourself,’” Garber said. “Even in that very, very difficult moment for him, he was thinking of me.”

Each step of Grossman’s recovery was an emotional challenge for the two best friends — from the ambulance ride and the transfer out of the ICU, to Grossman going home and living alone. But perhaps the most meaningful step was when they were finally able to bike together again. With Grossman on a hand bike, they set out on a trail and back to bonding.

“It’s awesome,” said Garber. “The best part about it is that now we’re just living our lives.”