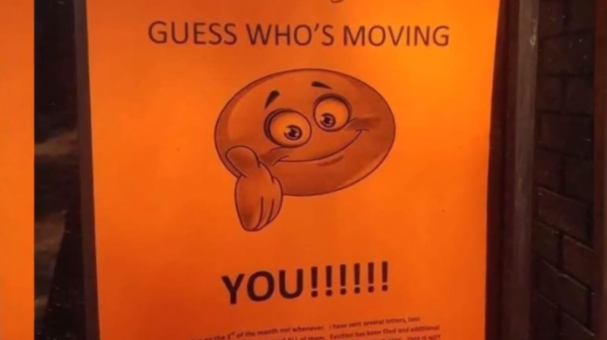 An eviction notice posted at a Tennessee apartment complex has gone viral.

“It’s antagonizing,” Deadrick Flemming told WREG. “I feel like it’s kind of embarrassing. It’s a shameful situation for someone that is trying their best to make ends meet.”

The notice, which features a giant smiling face sticking its hand out, reads, “Guess who’s moving?” and follows up with “You.”

The note continues: “Rent is due on the first. Not whenever.”

Christian comedian, KevOnStage, posted a video about the note that quickly spread like wildfire. It has been liked nearly 18,000 times on Instagram.

“You already know I’m broke, you gotta roast me with the hand?” the comedian asks. “Why you gotta break me down like that?”

Some residents of the apartment complex say they refuse to pay rent because management refuses to make repairs.

Chasity Blackburn, senior director at the complex, said the notice may be bold, but collectors have a process to follow.

“I’m not surprised by what you are saying. But I also don’t agree, because that’s the market,” Blackburn said. “She does anything and everything she can to collect the money.”

Locals had mixed reactions to the sassy notice. Joshua Clay called it “petty,” but Marcise Taylor argued that people wouldn’t have problems if they paid their rent.

“I mean, pay your bills and you won’t get it. That’s the bottom line,” he said.