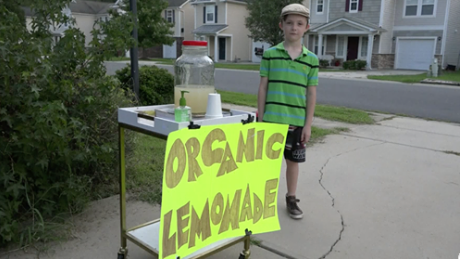 North Carolina authorities arrested a juvenile Wednesday they say robbed a 9-year-old lemonade vendor of $17 at gunpoint, a stickup that prompted an outpouring of sympathy and donations for the young entrepreneur.

Tony Underwood, a spokesman for the Union County Sheriff’s Office, said detectives had obtained security camera footage of a person who matched the suspect’s description in an area near where the holdup occurred. Underwood said a juvenile, identified as a male in the agency’s news release, was arrested without incident.

The suspect’s identity was being withheld under North Carolina law. Detectives working with the state’s Department of Juvenile Justice obtained petitions charging the juvenile with robbery with a dangerous weapon and possession of drug paraphernalia, authorities said.

A judge issued a secure custody order for the suspect. Underwood said the order means the suspect will be confined until his next custody hearing in juvenile court.

The young vendor, whose first name is Mark, told sheriff’s deputies he was held up at gunpoint Saturday while selling lemonade at a traffic circle not far from the entrance to his community in Monroe, about 30 miles (50 kilometers) southeast of Charlotte. Investigators subsequently said they were seeking a male suspect.

“I was thinking, what is wrong with this guy?” Mark told NBC affiliate WCNC. “I thought, nobody has ever robbed a lemonade stand with a gun.”

A business card that one customer collected from the lemonade stand said Mark also works as a lawn mower, dog walker and professional ring bearer.

A person who responded to a text sent to the telephone number listed on Mark’s business card said Tuesday that the boy was selling lemonade again Sunday at a community pool and had collected more than $250 in donations.