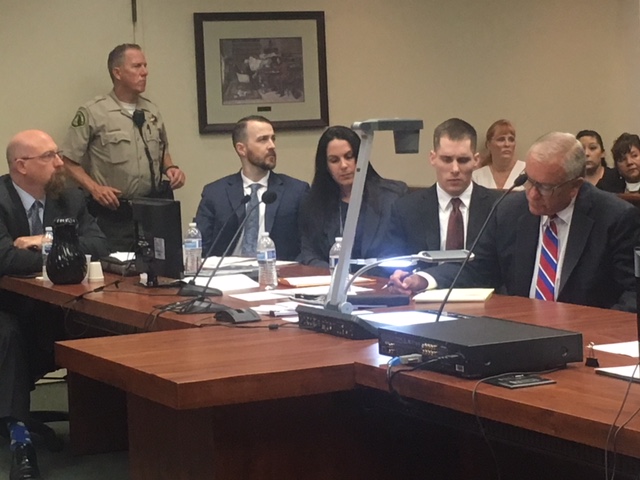 Two men who murdered a Pinyon Pines family over a decade ago in a methodical attack that involved “a high degree of cruelty” were each sentenced Friday to life in prison without the possibility of parole.

“These murders were carried out in a sophisticated and planned manner,” Schwartz said. “The crimes involved great violence and a high degree of cruelty.”

In June, a 10-man, 2-woman jury found Pape and Smith guilty of the attack at 68-550 Alpine Drive, south of Palm Springs.

“When they killed my little sister Becky, they stole my world,” Jessica “Drew” Friedli told the court. “I lost everything when they took the lives of my mother and sister. All that was left were charred corpses of the beautiful people they once were.”

“I felt I lost everything after my father was maliciously killed,” said Kathryn Hayward, Jon Hayward’s daughter. “The devastation created by these two individuals has caused so much heartache. They carried on with their lives afterward. They got to feel happiness, while ours was taken.”

Becky’s father, Ronald Friedli, thanked prosecutors and detectives for their dedication to justice, saying he had at one point “given up hope.”

“Becky was dear to me. She was a great girl,” Friedli said. “I’ve never said this publicly, but she had been burned on her chest when she was 8 years old. She lived in complete fear of fire. When these two men burned her, they knew that. It was wrong.”

Pape was convicted of two counts of first-degree murder and one count of second-degree murder, while Smith was acquitted of one murder charge and found guilty of two others in the first degree. The acquittal related to Becky Friedli, while Pape’s second-degree conviction was for her death. Jurors also found true special circumstance allegations that both men had taken multiple lives in the same crime.

Smith claimed innocence, telling the court he felt “no shame and no remorse.”

“I did not take your loved ones from you,” he said, turning toward the roughly 100 spectators in the packed courtroom. “I did not commit these crimes. You still don’t know who really did this.”

He called the prosecution’s case a “fallacy,” insisting that evidence had been “manipulated” and that jurors had been “lied to for the right outcome.”

“It’s easy to make mistakes. I don’t hate the jury for hearing the wrong story,” he said. “There’s an opportunity to admit and correct mistakes.”

Smith’s ailing father, John Conrad Smith, challenged the jury’s findings, leveling criticism at the prosecution for relying on the testimony of a convicted felon to mount a case against his son.

“He didn’t do what they said,” the elder Smith told the court tearfully. “He’s an outstanding young man.”

The defendant’s mother, Jana Smith, asserted her son’s innocence and assailed detectives for “totally ridiculous” management of the investigation.

“He served his country (as a U.S. Army Ranger) and never asked for recognition,” she said. “I pray for justice, because this is not justice.”

Pape’s mother, Kathleen Pape, showed pictures of him with family and his beloved pets, a number of which were rescued from the streets.

“A person who cares this much for the least of God’s creatures would not take the life of a human being, let alone three,” she said.

The defendant’s father, Gregory Pape, said taking his son out of society “lowers the luminosity of this world.”

Assistant District Attorney John Aki said that the defendants’ own statements, forensic findings and electronic evidence were sufficient to convict them.

Aki referred to a Catholic Pro Life Ministries business card found nearly 200 yards behind the victims’ home, containing Smith’s DNA. He said signals received from the defendants’ phones, bouncing off area cell towers, showed they were heading in the direction of Pinyon Pines that night. He noted that both men’s phones were “dark together” at the time of the murders.

Aki rejected the defense’s position that Pape came by undisclosed information regarding Becky Friedli’s remains through someone milling around near the crime scene the following day. Pape told a detective that he was aware a young woman had been ” found in a wheelbarrow.” Yet the only witness close enough to Friedli’s burning body an hour after it was set alight thought it was a “mannequin.”

Aki stood by the statements of convicted felon Jeremy Todd Witt, whom the defense portrayed as a shady character willing to implicate Pape and Smith in the killings to collect a reward.

Witt was excused from testifying due to an unresolved misdemeanor case in Indio, and instead, his 2016 preliminary hearing testimony was read to jurors. Aki recounted Witt’s encounter with his coworker, Smith, three weeks after the killings, during which the defendant told Witt, “We were there. It all went wrong, and we torched the place.”

Hayward suffered two shotgun blasts to the chest, while Vicki Friedli was fatally wounded with a semiautomatic handgun. An autopsy could not determine how Becky Friedli died because of the extent of thermal damage to her body. The victims’ two-story residence was destroyed in a gasoline-fed fire.

The defendants’ statements to law enforcement suggested they harbored some enmity toward Becky Friedli. Pape told one investigator that the young woman was “kind of obsessed with me,” even though they had ended their relationship eight months before her murder. He evinced little sympathy immediately after her death. Smith, too, spoke in low terms about the victim, characterizing her as a bother who frequently sought Pape’s attention.