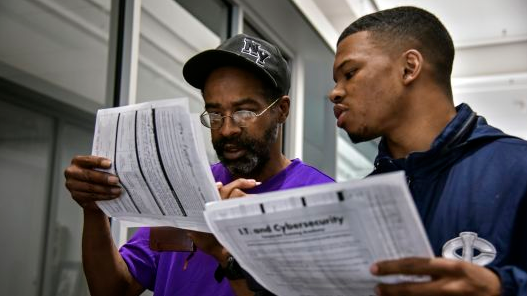 But according to the official count from the Bureau of Labor Statistics, most of the employment gains for black people since the Great Recession occurred during the Obama administration.

During the eight years President Barack Obama was in office, black employment rose by roughly 3.2 million, or more than four times the 700,000 jobs added so far since Trump took office.

Trump on Tuesday called Manigault Newman a “dog” and his campaign took legal action against her as the two former reality TV stars escalated their public feud.

The spat came as Manigault Newman, a former contestant on Trump’s “The Apprentice” TV show, publicly released more recordings from her time in Trump’s orbit as she promoted her tell-all book, “Unhinged,” describing her year at the White House. Before she was fired in December, she was the highest-ranking black American on the White House staff.

“Not only did he do that for African-Americans, but Hispanics. 1.7 million more Hispanics are working now,” she said. “This president cares about all Americans and is committed to helping them and is putting policies in place that do that.”

But she stopped short of comparing the Trump and Obama administration’s records on job creation for Hispanics.

In the book, Manigault Newman accused Trump of making derogatory statements about African-Americans, Filipinos and other minorities, as well as exhibiting “forgetfulness and frustration.”

On Twitter on Tuesday, Trump wrote: “When you give a crazed, crying lowlife a break, and give her a job at the White House, I guess it just didn’t work out. Good work by General Kelly for quickly firing that dog!”

In recent days, Manigault Newman has released audio of her firing by White House chief of staff John Kelly and of a call from Trump in which he says he did not know about her dismissal.