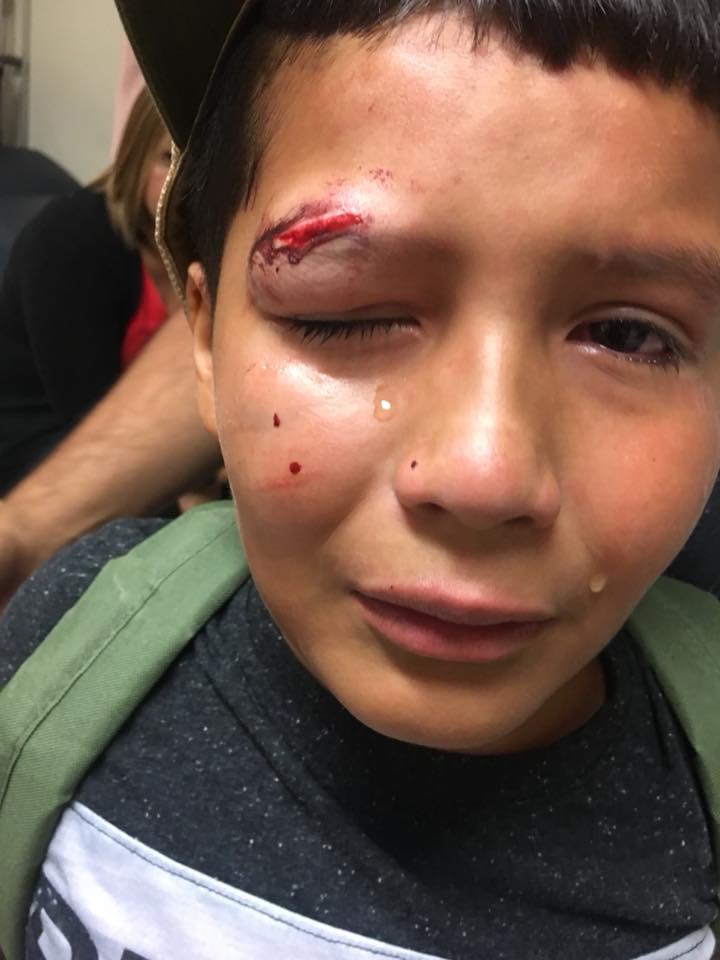 A fifth-grade boy at Two Bunch Palms Elementary School ends up in the emergency room Monday morning after his mother says a bully punched him in the face.

Experts say bullying has become all too common in school. Whether it’s high school, junior high or in this case, at the elementary level. Sometimes it’s verbal abuse. Other times it gets physical.

“When the day started I said to myself, ‘I have a bad feeling about today,” said fifth-grader Aiden Vasquez.

As it turns out the 10-year-old was right. First, it started with name calling.

The result was a black and swollen eye along with several stitches to close a laceration on his eyebrow.

“It piss me off and makes me emotional…It makes me crazy,” said Aiden’s mother Lizette Casanova. “Last year he got a cheek laceration. He got pushed against a wall supposedly and his face got cut open. Last year he got three stitches.”

After the incident she took a picture of Aiden’s face and posted it to Facebook, calling out the school for not doing enough to protect her child. The post has been shared almost five 5,000 times and has garnered almost 900 comments. In response to the incident and the social media post, the principle at Two Bunch Palms Elementary sent a letter to parents. It reads in part, “There are times when what is posted does not convey the complete story and can cause multiple rumors to circulate.” Casanova meanwhile says her sons face say it all.

“When he turned around and looked at me I screamed. I flipped out,” said Casanova.

She later asked Aiden why he didn’t defend himself.

“I told my mom, I got it from Star Wars, that it’s not the Jedi way,” Aiden said.

KMIR News contacted the Palm Springs Unified School District and was told that it could not comment on specific incidents because of confidentiality laws. Officials with the district say student safety is their number one priority.