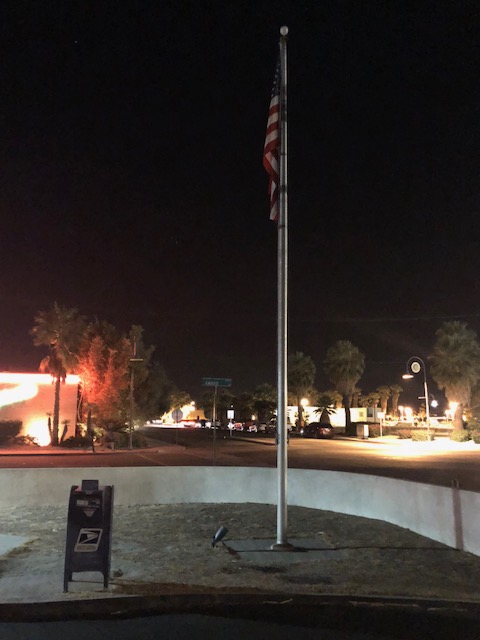 It’s a federal law to handle an American flag properly but a war veteran, who we’ll call Steve, is saying the Palm Springs Post Office isn’t fulfilling its duties. Now, the government-owned business’ lack of action is being perceived as disrespect.

“If you’re going to keep it raised 24 hours a day it’s supposed to be lit,” Steve said. “About two and a half or three months ago, I had some business there and I just let them know, ‘hey I noticed the flag isn’t lit’.”

After assuring him it would be taken care of, he didn’t see any changes.

“That’s okay, if you’re not going to light it, take it down,” he said.

Steve has mentioned the flag three times to the office. This photo taken Monday night shows, again, no changes. 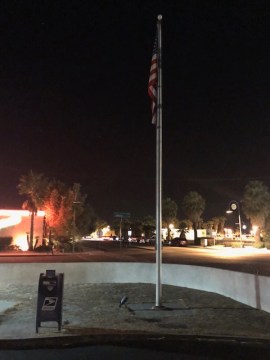 The Flag Code is a federal law which reads in part:

“It is the universal custom to display the flag only from sunrise to sunset on buildings and on stationary flagstaffs in the open. However, when a patriotic effect is desired, the flag may be displayed 24 hours a day if properly illuminated during the hours of darkness.”

“I worked for the government for 31 years and I am a Vietnam War vet.”

The flag being handled properly, means a lot to him.

The Palm Springs Post Office Supervisor told NBC Palm Springs Tuesday afternoon, they have a maintenance request in. Starting Tuesday night, they will take down the flag daily until the request is fulfilled.