Former Prison Inmate Gets a Shot With Warriors Farm Team 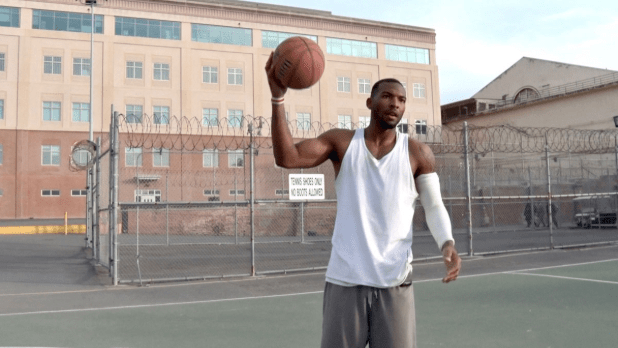 After seven years in prison, newly-released inmate Harry Smith suited up in a blue and gold uniform and took to the court of the Golden State Warriors training facility in Oakland — reigniting pursuit of a dream that seemingly died when a domestic violence conviction sent him to San Quentin Prison in 2011.

Just a week before the tryout for the Warriors’ Santa Cruz farm team a few weeks ago, Smith had been enveloped in one of the nation’s most infamous prisons, home to California’s death row.

“I didn’t have nothing but like seven days after I got out to prepare for this tryout,” Smith said, shooting hoops in a Daly City park.

Smith’s path to the Warriors court that day was nothing he could’ve imagined eight years earlier when he was an aspiring student at San Francisco State, eyeing dreams of a professional basketball career. When what he describes as an “unhealthy relationship” imploded, the repercussions of his actions landed him in prison for what was originally an eight-year stretch.

“The transition was hard,” Smith said, “because I’m going from a college campus to being dropped off in a level three war zone.”

Throughout his time in prison, Smith said he stuck to his own principled path — eschewing the rampant drugs, violence and hopelessness that seemed to imbue prison life. He joined a program that mentored young people. He cloaked himself in religion.

“No matter what type of state I was in,” said Lemar Harrison, a former inmate who befriended Smith in San Quentin, “whenever I seen him he just had this joy, this inner joy that would exude out of him.”

Smith was removed from society for seven years, but he wasn’t removed from basketball. Inside prison he played every chance he got. He felt the warm familiar embrace of the game, even in the rough-and-tumble rigors of prison ball.

“Prison ball is like football,” Smith said. “It’s all just heart and all just grind.”

It wasn’t just fellow inmates squaring up on the other side of the ball. Every year the Golden State Warriors sent a contingent of players and staff to mentor inmates and even to play against the prison team, the San Quentin Warriors. Some years the Golden State team would pummel the inmates. Finally this past September, days before his release, the Smith-lead prison team beat the visitors.

“I think that day was the day that a dream that was lost started reopening up,” Smith said.

When Smith was released several weeks ago, the Warriors steered him toward an open tryout with the Santa Cruz Warriors, the organization’s G-League team. Smith said the team has invited him back for a second tryout which hasn’t happened yet.

While the experience has jump-started his dream of a pro career, he’s keeping that dream in check. He has no delusions he’ll share the court with Kevin Durant or Stephen Curry although he certainly wouldn’t turn down the opportunity.

“I want that shot to play a couple seasons,” Smith said. “But I think where I’m headed at with basketball is more so coaching, mentoring, training, teaching.”

Smith seems to light up most when he talks about mentoring young people and helping guide them down a path that runs away from his own. In the few weeks he’s been out of prison he’s visited basketball courts to talk to children and has given a couple lectures.

“My hope is that he gets to achieve his dream,” said Harrison who is also reacclimatizing to life outside prison. “The only thing that I’ve ever seen him want to do is make amends and help other people.”

Smith is waiting the call for the next wrung on his journey back. How far he’ll travel in basketball is like the jump ball where you never know its trajectory until the moment of impact. Smith knows whatever direction it takes, he will have to control his own path.

“It’s even bigger than making the team, it’s getting out there, surviving, living, being a law abiding citizen,” Smith said. “I definitely view it as a second chance at a first class life.”