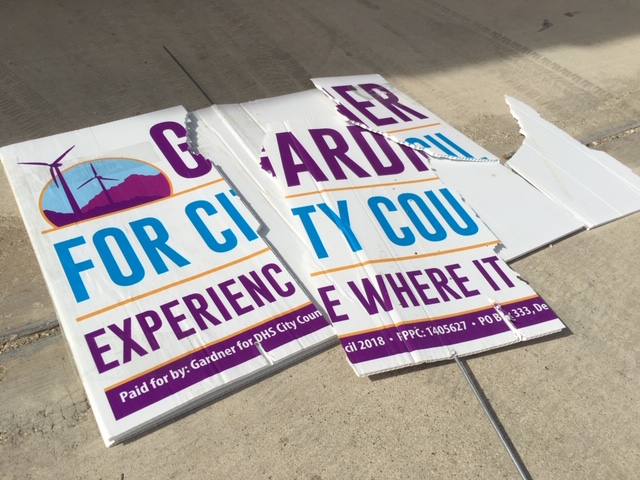 Tempers are heating up as we approach election day. A family in Desert Hot Springs takes to social media after someone takes a political sign from their front yard and tosses it into the street.

Incidents like this are not new, but this time it was caught on camera.

The sign that was vandalized is one of many supporting Desert Hot Springs City Council candidate Gary Gardner.

“It’s kind of sad that people think they have to take out their frustration, whether it’s me, or the guy who put it up, or life in general, by taking a political yard sign, ripping it up and throwing it in the street,” said Gardner.

The incident is more than just petty, it also happens to be illegal.

“If the sign is pulled out and damaged in any way, we’re looking at vandalism. If they remove the sign and take it with them, then we’re talking about theft,” said Deputy Chief Jim Henson of the Desert Hot Springs Police Department.

The sign was not taken, but it was damaged.

“It’s something that happens every year. We’ll get spray painting, sometimes we’ll get a sign removed. But yeah, it’s just part of the political season,” Henson said.

“It’s just kind of a sad statement, and vandalism is appropriate to charge on that, but I’m not going to pursue it,” said Gardner.

Desert Hot Springs police say this is the first political sign that they know of to be vandalized in the city this year. Good news for candidates like Gardner who say campaigns are not cheap. A single sign like the one vandalized costs about $10 dollars to make. If you’ve driven around the Coachella Valley lately, you know there are plenty hanging on the side of the street.

“If you don’t like me, hey that’s your right. Go ahead and don’t vote for me. But don’t go throwing peoples signs out,” said Gardner.