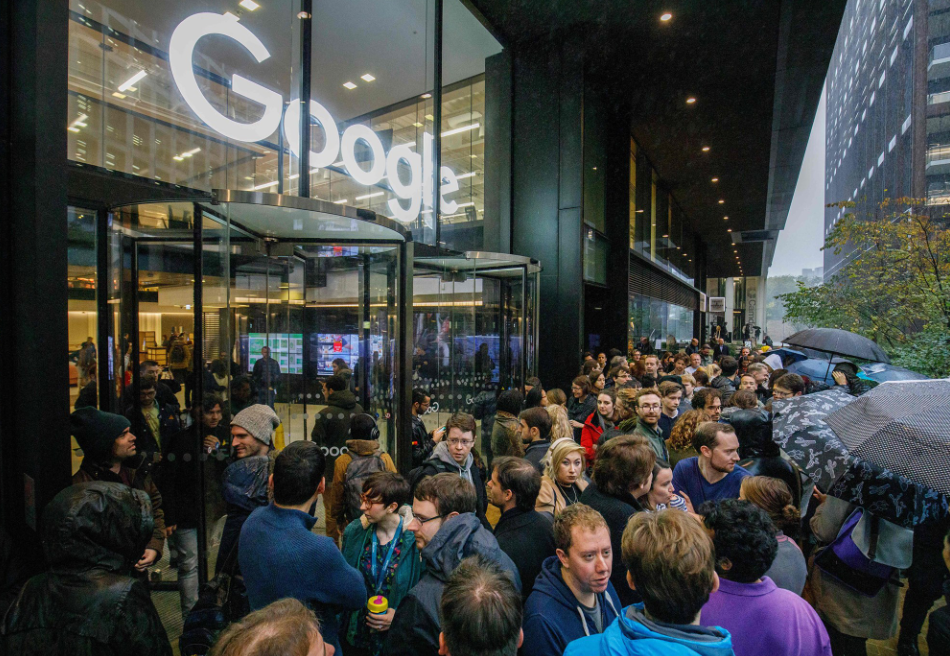 Google employees in company offices around the world began staging a walkout on Thursday to protest the company’s handling of senior executives accused of sexual misconduct.

The protest was scheduled by organizers to begin at 11:10 a.m. local time for each office, with a Twitter account set up by protest organizers featuring walkout photos from Singapore, Tokyo, London, Dublin and other locations.

The walkout was organized in response to a report by The New York Times last week that found two senior Google executives had been paid tens of millions of dollars in exit packages despite being accused of sexual misconduct.

A third senior executive named in the Times article had been allowed to stay at the company but resigned on Tuesday.

The report drew a swift response from Sundar Pichai, Google’s chief executive. That same day, Pichai and Eileen Naughton, the company’s vice president of people operations, sent an email to employees saying that the company was “dead serious” about making sure the company provides “a safe and inclusive workplace.” Pichai and Naughton said that the company had fired 48 people without pay for sexual misconduct over the past two years.

Google employees and contractors will be leaving these flyers at their desks tomorrow. #googlewalkout pic.twitter.com/rqFbXzavZQ

Very proud to participate in the #googlewalkout today showing solidarity with my colleagues, fighting for equality and demanding real change ! pic.twitter.com/QN5gzkigPr

“Earlier this week, we let Googlers know that we are aware of the activities planned for today and that employees will have the support they need if they wish to participate,” Pichai said in an email. “Employees have raised constructive ideas for how we can improve our policies and our processes going forward. We are taking in all their feedback so we can turn these ideas into action.”

The Times reported on Wednesday that protest organizers expected more than 1,500 employees to participate in the walkout. A Twitter account, @GoogleWalkout, said that employees were demanding five changes: an end to forced arbitration on cases of harassment and discrimination; a commitment to end pay and opportunity inequity; a publicly disclosed sexual harassment transparency report; a new process for reporting sexual misconduct; and elevating the company’s chief diversity officer to report to the company’s CEO and have that officer make recommendations to the company’s board of directors.

The group that organized the protest also called for an employee representative to be added to the company’s board.

In London, Google employees said on Twitter that weather forced employees to remain inside, but that people filled the biggest room in the office with more listening in overflow areas.

Marc Cohen, an employee in Google’s London office, said he was participating to send a message to the company’s leadership.

Google Ann Arbor represented in the rain, over 100 strong! pic.twitter.com/nYi5K7FxnN

“I’m disappointed by some of the things I’ve been reading about and hearing about how complaints have been handled by Google, and I wanted to share my support for people who have to deal with those kind of situations and also as a sign for my own personal dissatisfaction for how Google has handled some of these situations in the past,” Cohen said.

Sam Dutton, who also works in Google’s London office, said he hoped the walkout would inspire change within Google as well as other companies.

“I think there is a change in mood across the world in many different companies, and I hope this will have a positive effect,” Dutton said.

Most employees declined to talk to journalists, saying that they appreciate the coverage but wish not to comment about their involvement past their physical presence at the day’s protest.