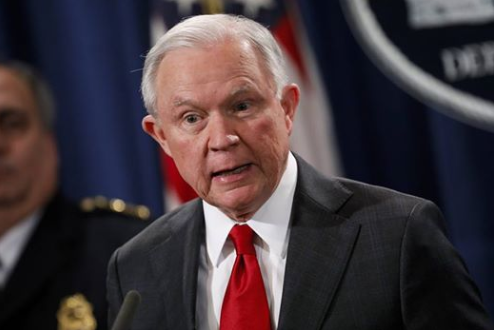 The announcement — made by Trump on Twitter — came the day after the midterm elections.

We are pleased to announce that Matthew G. Whitaker, Chief of Staff to Attorney General Jeff Sessions at the Department of Justice, will become our new Acting Attorney General of the United States. He will serve our Country well….

The president has repeatedly criticized Sessions — one of Trump’s biggest supporters during the campaign — particularly for recusing himself from the Russia investigation.

Sessions’ departure after the midterms was not unexpected.

Trump was asked about Sessions’ future during a lengthy press conference Wednesday afternoon. At the time, he declined to comment on whether Sessions would be leaving the administration.

“I’d rather answer that at a little bit different time,” Trump said, adding that he was “looking at different people for different positions.” He commented that Cabinet-level changes were “very common after the midterms.”

Whitaker, a U.S. attorney in the Southern District of Iowa from 2003-09 and Sessions’ chief of staff since late 2017, was a conservative legal commentator. He wrote an opinion column for CNN before joining the Justice Department titled “Mueller’s investigation into Trump is going too far.”

Reacting to the news, incoming House Judiciary Chairman Jerold Nadler tweeted that Americans must get answers “immediately” for why Sessions was ousted.

Americans must have answers immediately as to the reasoning behind @realDonaldTrump removing Jeff Sessions from @TheJusticeDept. Why is the President making this change and who has authority over Special Counsel Mueller’s investigation? We will be holding people accountable. https://t.co/weykMuiCxm

Senate Minority Leader Chuck Schumer, D-N.Y., told reporters the timing of the move was “very suspect,” adding that if the move was made to interfere with Mueller’s probe in any way, it would create what he considered a “constitutional crisis.”

If Whitaker is now supervising the Mueller investigation, any final report by the special counsel on his findings will go to Whitaker, who could decline to make it public or transmit it to Congress. But the House intelligence committee could subpoena it and anyone involved in preparing it.