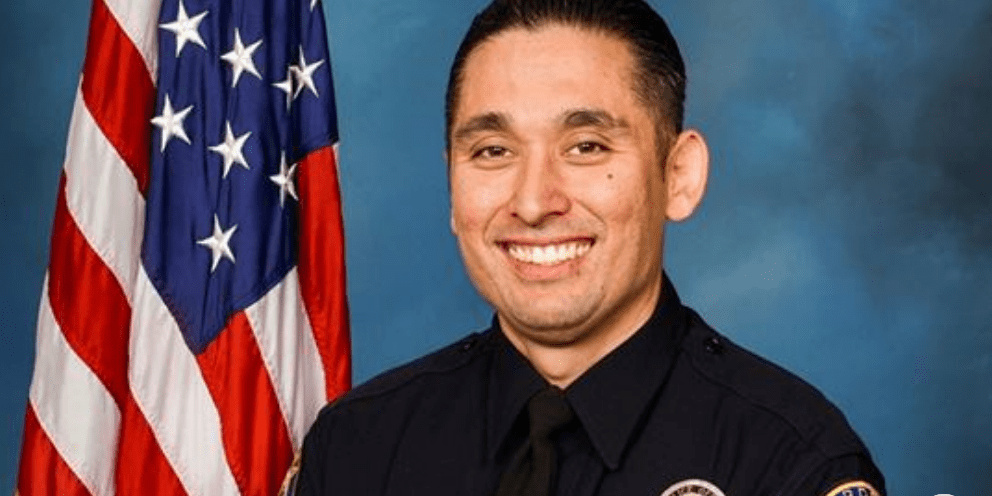 A Gardena police motorcycle and father of a 2-year-old boy has died, a day after suffering critical wounds in a crash on Wednesday, police said Thursday.

Officer Toshio Hirai, 34, was in a crash as he was on his way to work about 7:50 a.m. at Western Avenue and 238th Street in Harbor City, officials said.

Hirai, a husband and father of a 2-year-old son, was taken to Harbor-UCLA Medical Center, where he died, according to Gardena police.

“It is very difficult and it is very heartbreaking,” Gardena Police Department Chief Thomas Kang said at a Thursday night news conference outside the hospital. “I shed a lot of tears today as if Toshio was my own son. It’s devastating for me.”

Hirai was a 12-year veteran of the police department and a member of its SWAT team.

The driver of the other vehicle stopped at the scene and cooperated with investigators, according to the Los Angeles Police Department, which was investigating the collision. Neither alcohol nor drugs were suspected as factors in the crash, police said.

“We are deeply heartbroken today,” the department said in a news release.

Toshio grew up in Gardena and attended Gardena Buddhist Church. He started working at the Gardena Police Department in 2006. He worked as a motor officer and was a SWAT team member and traffic investigator.

“He spoke five languages, loved life, had the best sense of humor. He worked hard for our community. Most of all he absolutely loved and cherished his wife and 2-year-old son.”

Detective Patrick Goodpastor said Hirai’s wife is “a tough woman,” and that the son “going to have a lot of father figures from Gardena police to help her with that process.”

If you wish to donate to the Hirai family, please go here. Checks can also be made payable to the GPOA and mailed or brought to the Gardena Police Department at 1718 W 162nd Street, Gardena CA 90247.

Donations to assist the officer’s family can be made by visiting http://ow.ly/OKzH30mDACi. Gardena police Lt. Steve Prendergast said it is the only legitimate online donation site for the fallen officer, his wife Kristen and their son. All donations are tax deductible.

“We know Toshio is watching over us, just from a higher place now.  Rest in Peace warrior, we have the watch from here. Gardena Police Officer Toshio Hirai, Badge #381 End of watch, November 15, 2018.”