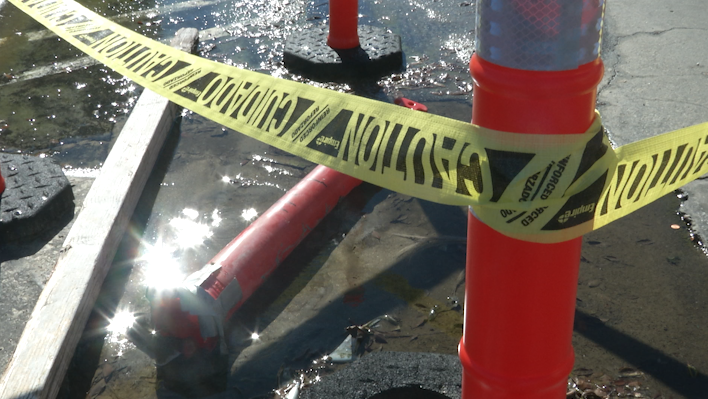 A water leakage has flown through the old Palm Springs Mall parking lot for six months. That parking lot is connected to the site for the new College of the Desert Palm Springs campus. While the campus isn’t set to open for a while, the leakage has gone on since August and up until now, nothing has been done to stop it.

John Barnwell, a father of two considering sending his daughter to the new campus, passes by the water leakage frequently and said when he reached out to Desert Water about it, they didn’t seem to care.

“Oh yeah, it’s still running, as you can see,” John said as he pointed at the water leakage on Friday.

“We have an underground leak,” Robert Rauscher, project manager of COD, said. “It’s a small leak and we first discovered it right about the first of August,”

Rauscher said they sent out engineers when they found out about it. The engineers determined there was no threat to students and decided to take care of it in the most “cost effective” way.

“My concern is our kids need water in twenty years and we’re wasting gallons and gallons of water here for six months,” Barnwell said.

Holding off on fixing the leak is not cost efficient anymore. Desert Water said they plan on fining the college for the public leakage. The fine would be about $100.

Coincidentally, when NBC Palm Springs showed up to the site, construction workers started fencing off the area.

“We’ve been planning for months now to get that fence up and get our operations underway to get that building safe and ready for students,” Rauscher said.

“Get this water turned off right now,” Barnwell said. “Make sure that somebody inspects this building before our kids go in there that there’s no mold.”

Rauscher said another reason they couldn’t cut the water off was due to the Brightwood campus next door, which is now closed.

When NBC Palm Springs asked Desert Water how much water they lost from the leakage. Krause said that information is “private information.” Desert Water will be checking the water leak next week. If it’s still active, they’ll fine the college until it’s fixed.