Russian President Vladimir Putin warned Thursday that the world is underestimating the threat of nuclear war and blamed the U.S. for risking a collapse in global arms controls.

The U.S. is threatening to suspend a Cold War treaty limiting medium-range missiles because it says one of Russia’s weapons violates the agreement.

During his annual marathon news conference Thursday, Putin insisted that Washington was to blame.

“Now they are leaving the treaty on eliminating the short and middle-range missiles,” Putin said referring to the Trump administration. “What’s next? It’s hard to imagine how the situation will evolve. What if those missiles appear in Europe? What do we do then?”

Most experts agree Russia has been violating the Intermediate-Range Nuclear Forces Treaty, signed in 1987 by President Ronald Reagan and Soviet leader Mikhail Gorbachev.

However, many of those same analysts have criticized President Donald Trump for walking away from the INF Treaty. They argue that quitting it won’t bring Russia into line, and instead could trigger an arms race with ground-based nuclear missiles returning to Europe for the first time in decades.

On Thursday, Putin also said there “have not been any negotiations” with the U.S. to extend New START, a separate treaty that caps arsenals of intercontinental ballistic missiles and other weapons. It expires in 2021. “Not interested? Don’t need it? Fine,” he said.

And he warned that nuclear war could “lead to extermination of the whole civilization.”

Putin added: “We know how to secure our safety. But, in general, it’s very bad for humanity as it takes us closer to a very dangerous line. It is a very serious question and it is a shame it is being underestimated … We are now witnessing the collapse of the international system of nuclear containment.” In March, Putin boasted that Russia has a new array of nuclear-capable weapons including an intercontinental ballistic missile that renders defense systems “useless.” In that speech to lawmakers and elites, he also accused the West of “ignoring us. Nobody listened to us. Well listen to us now.”

Asked whether another meeting with Trump was in the works, Putin suggested the Democrats taking the House majority next month might make “direct dialogue with Russia” more difficult.

“Almost with certainty, one can predict there will be new attacks on the current president,” he said.

Putin added that it was “disrespectful” to American voters to try to delegitimize Trump’s 2016 election win.

Some 1,700 journalists were accredited for the news conference that lasted more than four hours.

The Russian president appeared to back Trump’s decision to pull American troops out of Syria — albeit with a sizable caveat.

“As far as the victory over ISIS, in general I agree with the U.S. president,” Putin said. “We have achieved considerable changes in the fight on terrorism in this territory and have executed serious blows to ISIS in Syria.”

However, he also questioned the need for the U.S. military to be in the region.

“Is the presence of American troops necessary? I don’t think so,” the Russian president added. “Let’s not forget that their presence there is not legitimate. It wasn’t authorized by the U.N.”

He maintained Russian troops were different because they were “invited by the Syrian government.”

As part of a whistle-stop tour of the world’s problems, Putin was asked about France’s “yellow vest” protesters and suggested President Emmanuel Macron’s government was to blame for the crisis because they planned to hike gas prices. He said that Britain should “execute the will of the people” on Brexit rather than trying to wriggle out of leaving the European Union.

The Russian president was also asked about the crisis in the Black Sea last month that saw Russian ships ram, shoot and seize three Ukrainian vessels attempting to pass through the contested Kerch Strait.

Russia and Ukraine share the Sea of Azov as part of a 2003 agreement. But after annexing Crimea in 2014, Moscow now controls the Kerch Strait, and with it access to Ukraine’s own ports. 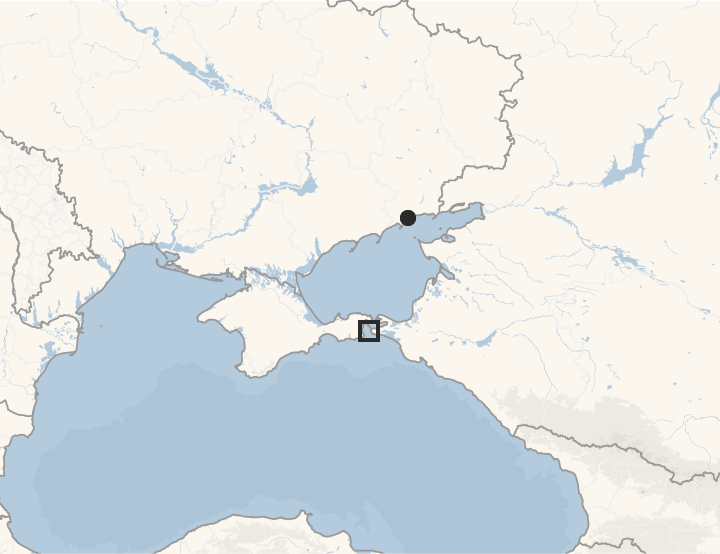 Putin reiterated Moscow’s previous claim that the incident was concocted by Ukraine as a “provocation” designed to boost the popularity of Ukrainian President Petro Poroshenko ahead of elections in March.

“Understandably, they have an election coming up. You have to aggravate the situating to raise the rating of the … current president,” he said. “Was it successful? From the perspective of raising someone’s rating probably, because the rating of Poroshenko seems to have risen.”

Putin was also asked what will happen to the 24 detained Ukrainian sailors, who their government claims are prisoners of war and should be released.

“There is an investigation. After the criminal case is over, we will see what happens,” Putin said.

The Russian president also claimed double standards when it came to Sergei Skripal, the former spy allegedly poisoned by Russia on British soil, and Jamal Khashoggi, the Washington Post columnist who was murdered inside the Saudi Consulate in Istanbul.

“Khashoggi was killed. It is obvious and recognized by everyone. Skripal, thank God, is alive,” Putin said.

“However, there is a flurry of sanctions against Russia and non-stop talk about it still. In the other case, however, there is total silence. Complete silence,” he added. “This is the politicized, Russophobic approach. It is a reason, only just a reason for another attack on Russia.”

On Wednesday, the U.S. Treasury Department imposed a new round of sanctions on Russia in response to its “continued disregard for international norms,” which includes Moscow’s interference in 2016 U.S. election.