Authorities on Thursday released a composite sketch of a man accused in the death of a 7-year-old black girl during a Houston-area shooting that her family believes might have been racially motivated.

The suspect is described as a white man in his 30s or 40s, wearing a black hoodie, with pale skin and blue eyes. 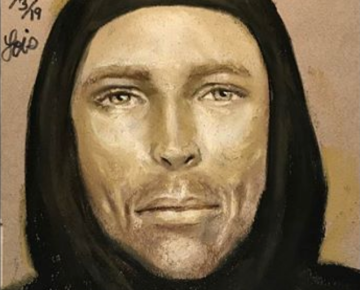 Basketball legend Shaquille O’Neal and a Houston police officer are covering the costs of the funeral for the girl who was shot and killed in a roadway shooting Sunday, Click2Houston.com reports. Meanwhile, Houston Texans player DeAndre Hopkins says he’s donating this week’s game check to the victim’s family.

The child, Jazmine Barnes, was shot in the head at about 7 a.m. Sunday as her mom, LaPorsha Washington, drove for coffee.

“We were going to get coffee. Coffee. And my baby lost her life.”

LaPorsha Washington, through tears, from a Houston-area hospital room

Washington told KTRK-TV that the gunman sped up after firing into her car, only to pull in front and slow down before firing again.

“He intentionally killed my child for no reason,” she said. “He didn’t even know her. He didn’t know who she was.” 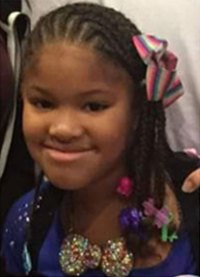 Washington was in the car with her four children, one of whom was injured by glass.

Investigators said the shooting was “totally unprovoked” and that they are looking for the driver of a red, four-door pickup in connection with the shooting.

Lee Merritt, a national civil rights attorney with an office in Dallas, and New-York-based activist and writer Shaun King have collected a reward of $100,000 for a tip that leads to an arrest.

Merritt said Wednesday that he understands his and King’s high profiles as activists means they will reach a lot of people with their appeal. Merritt said they will pass on any leads to the sheriff’s department.

Hopkins, a sixth-year wide receiver for the Texans, said on Twitter, “When I see Jazmine Barnes’ face, I see my own daughter” and vowed to turn over his playoff check to the family to help with the funeral and anything else they may need.

“On Saturday, I will be playing in your honor, Jazmine,” Hopkins tweeted.

When I see Jazmine Barnes' face, I see my own daughter. I'm pledging my playoff check this week to help her family with funeral costs and to support @shaunking @SherriffED_HCSO @SylvesterTurner in bringing this man to justice. On Saturday, I will be playing in your honor, Jazmine pic.twitter.com/oCRYSgfGO9

Sheriff Ed Gonzalez has declined to speculate on what prompted the shooting and has has asked people who live nearby to review their surveillance videos.

Gonzalez said he’s aware of claims by activists that the shooting was racially motivated but added that it remains unclear what prompted the shooting and investigators are considering all possibilities.

He said Wednesday that his agency is not “tone deaf” to concerns that race played a role in Barnes’ death, but he said the focus is on collecting evidence and developing leads, while a determination on motive will come later.

The gunman was described as a white bearded man in his 40s wearing a red hoodie.

Jazmine’s father, Christopher Cevilla, said his daughter was a loving and caring girl who was “very smart in school.”

The Sheldon Independent School District said in a statement that Jazmine was a second-grader at Monahan Elementary in Houston. The school district said additional counselors will be at the elementary when students return on Tuesday. The district asked parents to tell their children about Jazmine’s death.