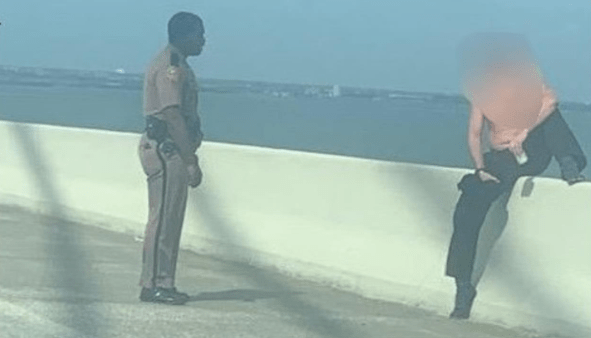 A trooper prevented a suicidal man from jumping off the Sunshine Skyway Bridge on Sunday, authorities said.

The Florida Highway Patrol said they got a call about a “suspicious person” standing on the wall of the bridge in the northbound lanes of the roadway at about 1 p.m., affecting traffic.

FHP Trooper Tabarie Sullivan arrived to find the man on top of the concrete barrier. He had one leg dangling off the bridge and his other foot was planted on the roadway, Sullivan said.

“He had no shirt on and he was drinking a Dr. Pepper,” the trooper told WFLA.

Sullivan approached the man and started to talk him down from the wall.

“I told him, ‘Sir, please don’t do it. Don’t do it today, you have more to live for.’ He explained to me, ‘No, actually, I don’t’,” Sullivan recalled. “The entire time I’m thinking, I cannot let this man jump off this bridge. He needs to understand there is more to live for and this too will pass.”

Sullivan said he offered a listening ear and asked if there was anything he could do to help.

“We just talked a little bit about life. I’m also married, I have a kid as well, so we discussed that. We laughed and joked,” the trooper said.

A few minutes later, Sullivan noticed the man’s leg was back over the barrier.

“I knew that was my chance then, so at that point, I just jumped on him, and I pinned him down and I waited,” Sullivan said.

Captain Richard Benton, an off-duty trooper was passing by on the bridge and stopped to help Sullivan get the man off of the wall, according to the FHP.

“Both were able to successfully detain the subject without incident,” Sergeant Steve Gaskins said in an e-mail to WFLA.

Gaskins did not provide any further information regarding the man’s condition.