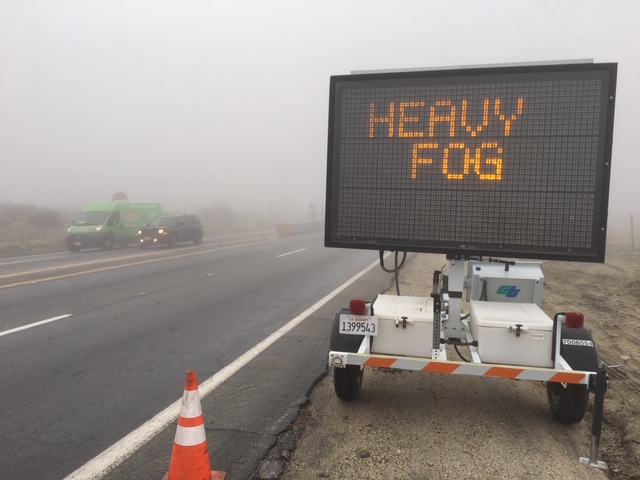 A winter storm is still wreaking havoc on local roads. If you drove around the coachella valley Wednesday you probably saw some of the effects of Tuesday night’s rain. The overnight showers leaving behind debris, flooded roads and car crashes.

“It’s not safe. I can tell you, it’s not safe. You can’t see more than five yards in the morning,” said truck driver Oscar Perez.

“Can’t see. I mean it’s kind of scary. I hate the fog,” said a Morongo Valley resident. “I’m staying home. We’ve had several accidents throughout this whole week on the Yucca grade and this morning again on the Morongo grade.”

On the Morongo grade, the fog was so dense it caused a traffic collision. The driver telling California Highway Patrol he was unable to avoid a boulder that came falling down a mountain side.

The crash happened around 6:30 am. Caltrans unable to determine whether the driver first hit the boulder or the guard rail. Evidence of saturated ground made apparent by small, medium and large rocks that sit ominously on the side of the highway.

“In the morning I got up here around four in the morning. I was driving up here and you couldn’t see anything. Plus it was raining too,” said Perez.

On the Coachella Valley floor, the usual trouble spots were affected by the rain. Indian Canyon Drive was closed and will likely remain that way until flooding subsides.

Meanwhile back up in Morongo Valley, residents are feeling anxious about even more rain on the way.

“People just don’t slow down. They drive like there is sunshine outside. It’s just really dangerous for everybody,” said a Morongo Valley resident.