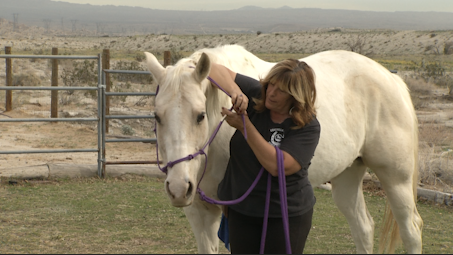 Yesterday we brought you a story out of Mecca, where a horse was found dead in its owner’s backyard. Today we looked into laws, if any, that may protect horses. We spoke to Animal Control Public Information Officer John Welsh who said there are laws to protect all animals, including horses. However, because horses are considered livestock, codes can be tricky to enforce, which is why we may be seeing these cases of abuse.

“Here in the Coachella Valley, we have a lot of problems.”

Annette Garcia, who works at the Coachella Valley Horse Rescue is talking about horses being abused.

“They don’t have protection. I mean look at what people do to horses. I mean, we have people that race their horses in the desert until they drop dead. Buttercup here was starved. She was in a dog pen. She was up to her knees in manure. She was starved.

The question is, why does this keep happening?

“Neighbors, they might see a horse being starved or tied to a tree or starved, but they’re afraid to call because they don’t want their neighbors to retaliate against them,” added Garcia.

Annette showed NBC Palm Springs a brand on a horse that she described as “horrific” and painful.” She also adds that this particular horse, Dakota, wasn’t halter broke, so her owners tied her with barbed wire, where she has visible scarring.”

Now, while the majority of the horses here at the Coachella Valley horse rescue have been saved from horrendous living conditions like Dakota here, most horse owners haven’t had legal consequences like going to jail because horse, in the United States, are only considered livestock.

“It’s heartbreaking when your hands are tied and there’s nothing you can do. Horses have a voice, and need a voice, and we have to be their voice and expose what is going on.”

However, at the end of the day, these rescued horses are loving and as sweet as can be. Something that Annette is extremely thankful for, but hopes laws can be put in place to protect horses a little bit more.

“If you would like to make a difference and a change in this community, imagine what it can do to other communities.”

Speaking on that change, Congressmen out of Florida have introduced a bill that would make animal abuse a felony with a prison sentence of up to seven years. Question is, will lawmakers include horses in that mix. NBC Palm Springs will talk to Congressman Jeff Stone to see what he has to say and bring you the very latest.