Local family wins a car thanks to good samaritans 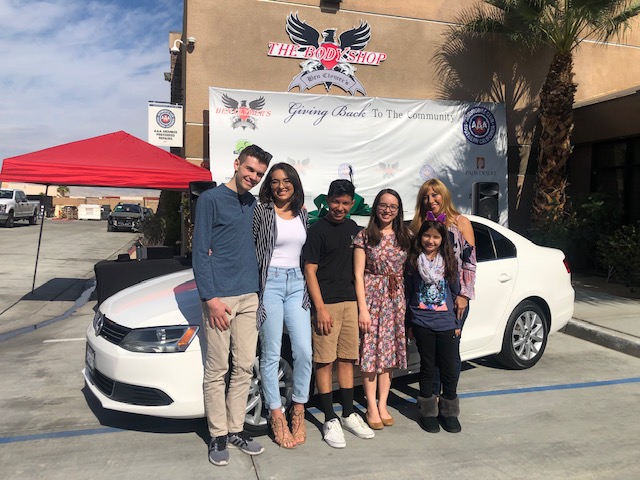 Claudia Abela could not hold back her tears as walked up towards the microphone to acknowledge the generous gift she was about to receive: a new car. Months ago, Abela applied to win a car that Ben Clymer’s The Body Shop was giving away. Her compelling story made the company choose her as a recipient.

“It’s a complete blessing at the right time,” Abela said.

Ben Clymer’s The Body Shop has been giving away cars to families in need around the desert for the past 10 years. Ben Clymer Jr. said this is a tradition that allows them to help the same community they serve.

“We get a car that’s been involved in an accident, we fully restore it,” Clymer said. “Our starting partner is the Automobile Club of Southern California.”

Along with other sponsors, which include Enterprise, Coachella Valley Volkswagen and PPG Paints Store, they buy auto body parts or provide car services to help restore a car. In this case, Abela received a Volkswagen Jetta 2014. 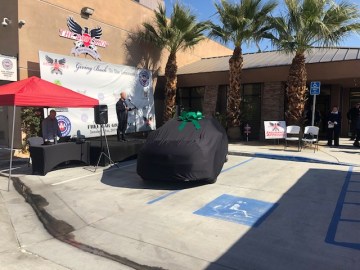 Abela said she tries her best to stay strong for her four kids, but she has not had it easy. First she lost her job after suffering an injury.

“[I worked with] risk students, severely disabled and preschools, and that is very taxing on the body,” Abela said.

As a result, she had to file for bankruptcy and gave up her car for that same reason. Her husband’s family let them borrow a car in the meantime, but it caught on fire a couple of days ago.

“I got home from church, turned it off, walked away, and I was taking my time throwing my trash away,” Abela said. “I just happened to look through my garage and saw smoke was coming out, so I called 911 right away and it just caught fire and it took out the garage.”

Clymer and his sponsors look for families ready to get up on their feet because as Clymer said “this has never been a handout it’s been a hand up.”

This family-run business has taken the initiative to giveaway vehicles as a way to reflect on all the help they once received from their community.

“My father when he was 10, he was one of 7 kids and his parents were very happily married, but his father was killed in a trucking accident, so suddenly there was a woman who went from happily married to having 7 kids all by herself,” Clymer said. 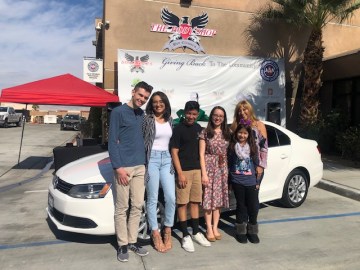 Abela said this will allow her to pursue her longtime dream of becoming a dental hygienist.

“Now it just makes it possible for me to look for work other than what was close to me, so maybe I can go out further,” she said. “I’m actually considering going back to school.”

As part of this gift, the family will get a year of free insurance, and they were surprised with a trunk full of groceries donated from Costco.