It may already be the first week of February, but on Christmas Card Lane in San Diego’s Rancho Penasquitos neighborhood, it is still Christmas – and with good reason.

Each year, the homes in the famously festive community along Ellingham Drive go all out with holiday light displays and decorations. The displays typically stay up through the end of the holiday season but, this year, many residents kept their decorations up well into the New Year for one simple reason: to bring happiness to a neighbor who missed Christmas due to severe illness.

On Dec. 12, 2018, Ryan Caine, 24, was rushed to a local emergency room with flu-like symptoms. He was diagnosed with pneumonia.

Ryan Caine’s illness quickly took a turn for the worse. His pneumonia turned septic, and he went into cardiac arrest. Ryan Caine slipped into a drug-induced coma that lasted six-and-a-half weeks. He was placed on life support, with his chance of survival meager.

Ryan Caine spent the holiday season in the hospital, with his family by his side, including parents Russ and Janet Caine.

While Ryan Caine was in the hospital, Janet Caine set up an online global prayer network. At one point, Janet Caine said there were 15,000 people across the world taking part in the coordinated prayer session for her son.

Slowly, with round-the-clock medical care and determination, he grew stronger.

On Jan. 24, Ryan Caine miraculously awakened from his coma.

He turned to his mom and asked, “Did I miss Christmas?”

“We said, ‘No, Christmas can happen anytime, and it is waiting for you at home,'” Janet Caine recalled.

The Caine family is big on Christmas.

Each year, they join their neighbors on Ellingham Drive by decking out their home in elaborate holiday decorations inspired by the characters from “Suzie’s Zoo.”

Sure, Ryan Caine had missed the festivities in real-time but thanks to the spirit of his neighborhood, family and friends, his Christmas would still come — only a little bit late.

After nearly two months in the hospital, Ryan Caine was discharged Wednesday.

As he arrived home to Ellingham Drive, he was met with posters, signs and balloons made for him by neighbors, and, of course, holiday decorations.

An incredible and heartwarming homecoming. Ryan Caine was in an induced coma for 6 1/2 weeks. Upon awakening one of his first questions was, “Did I miss Christmas?” His family and friends are making sure it happen today!. #nbc7 pic.twitter.com/fRFzI7AdOZ

Neighbors gathered around him, sincing “We Wish You a Merry Christmas.”

Christmas Card Lane rallied to give Ryan Caine the Christmas party that he missed.

With neighbors lining the street and cheering, Ryan Caine rode into his driveway in a truck accompanied by his family. The truck was covered in bright-pink, handwritten signs that read, “Thank All of You for Your Support and Prayers.”

Like a kid on Christmas morning, Ryan Caine’s face lit up as he walked into his home. Inside, holiday garland covered the staircase banister and a trimmed Christmas tree stood in the living room with wrapped gifts underneath it.

“Merry Christmas, honey,” his mother said. “Look at all those presents.” 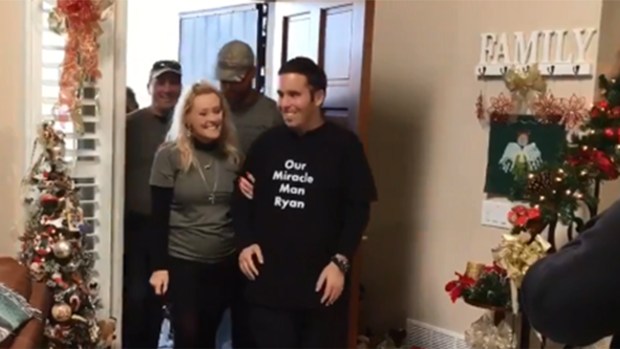 Ryan Caine, who is on the autism spectrum, is described by his family as having the exuberance of a 10-year-old.

He was overwhelmed with joy as he finally got to celebrate Christmas with his loved ones.

“I’m just so blessed to have Christmas still here. We can do it all year round, too,” Ryan Caine said, beaming.

The Caines credit doctors at Scripps Health and the incredible power of prayer for Ryan Caine’s recovery.

“We’re back here today because of all of you supporting him, and supporting us,” Russ Caine said at Ryan’s homecoming. “We can’t thank you enough.”

His family said the plan is for Ryan Caine to spend the next three to four weeks undergoing a health rehabilitation program at home on Ellingham Drive — a place where true magic is possible, no matter the time of year.