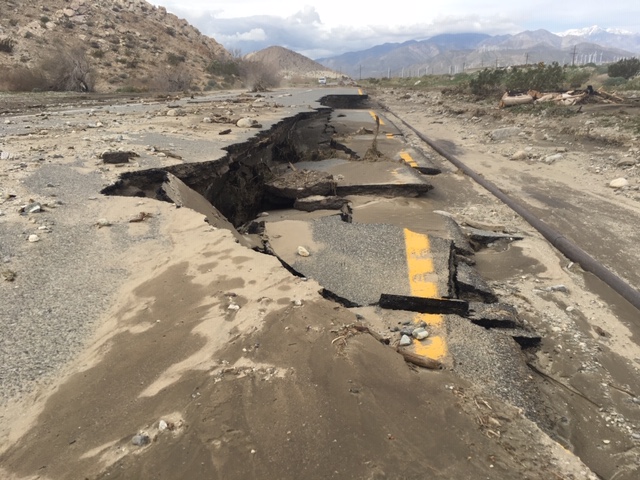 Dozens of residents in a Palm Springs neighborhood are slowly recovering Friday after a Valentine’s Day storm flooded out their community. Many people were stranded for hours.

On most days, Santiago Sun Canyon Estates is an idyllic community nestled in the foothills, but not yesterday.

“A lot of water, a lot of debris and everybody stuck not being able to go anywhere,” said resident Janis Ballinger.

This morning crews using shovels and a front-loader finally cleared the main road, but on the other side of the community the second entrance remains blocked. Efforts continue to dig out several cars buried in feet of mud.

“We we’re scared because the water was coming a lot so we tried to pull the vehicles outside but it was impossible,” said resident Elmer Perez.

Perez was trying to get out to pick up his kids from school when mud and flood waters buried his truck. He was trapped, but not alone.

“When I was trying to cross, one vehicle was stuck already and I tried to cross because my kids were in school, and I stopped outside with them because they were inside the vehicle,” Perez said. “And I asked them, do you guys want to go out, and they said no, we’re scared so we want to wait. And I said okay, I have to leave. When I tried to go again, the truck was stuck.”

One entrance to the neighborhood finally reopened but the community’s main route into Palm Springs is still blocked.

For several hundred yards Highway 111 is destroyed. In one spot, the road completely collapsed. Furniture, tires and debris, which floated onto the highway from the nearby community, is blocking the road.

While residents of nearby Santiago Sun Canyon Estates try to recover, one thing is for certain. They won’t soon forget Valentines Day 2019.