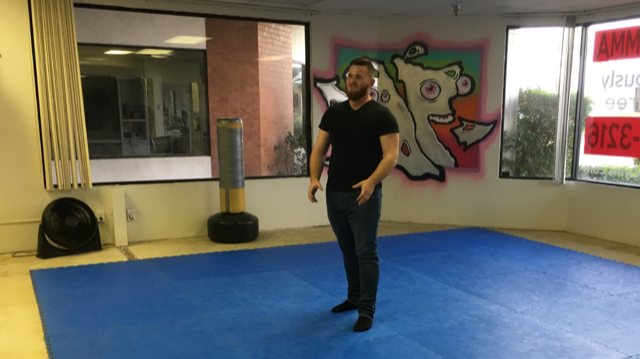 A local MMA fighter and instructor is fuming after broken promises by the landlord and/or management company he leases a Cathedral City gym from may cause him to shut the doors to his non-profit.

Jarrod Fiorda is a professional MMA fighter who grew up in the Coachella Valley. He leased the mixed martial arts studio about a year ago and says it has had problems since day one. After repeated requests for repairs he say the property management company and the landlord are giving him the runaround.

Jarrod Fiorda began training in mixed martial arts after his father died when he was five years old.

“I got in there because my dad died, I became very angry, my mom wanted to give me a very positive place to get out that anger,” Fiorda said.

About a year ago, he started non-profit Free MMA. But the martial arts studio he leased in Cathedral City had serious problems.

“We’ve reached out since day one. Since day one we’ve had issues with electricity, AC, flooding and we called them about all these different things, with nothing being done about it,” said Fiorda.

On Valentine’s Day, the studio flooded with water from the storm which forced him to periodically shut down. Fiorda says if Desert Properties made the repairs beforehand like they promised, this never would would have happened.

“Over the last few months or so we’ve lost out on probably ten thousand dollars worth of donations, due to the gym being closed due to flooding or any of the other problems that have occurred here,” Fiorda said.

“We’re not quite sure if it’s the landlord company or the owner themselves, but we usually get run around. Nothing gets taken care of or done here,” Fiorda said.

Fiorda says the lack of a usable facility could force him to shut the doors on his non-profit for good.

“The kids come in here. We have kids from foster homes, children who have been abused, children who are rich poor. Every walk of life…everyone loses something by this place not being open,” said Fiorda.

NBC Palm Springs made several attempts at reaching the property management company, leaving two messages. So far, our calls and messages have not been returned.

Shortly before the story aired on our broadcast, Desert Properties agreed to offer a five percent discount on rent for the the months of March and April, which equates to less than $100 dollars a month.

Fiorda says the periodic closing of the studio has costed his organization approximately $10,000 dollars in donations.