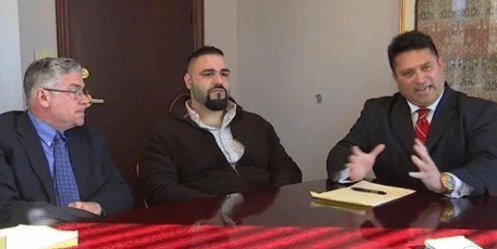 A Sylmar man who was caught on cell phone video repeatedly punching two women during a dispute with a downtown Los Angeles street vendor was charged with five counts of misdemeanor battery, the City Attorney’s Office announced Wednesday.

Arka Sangbaran Oroojian, 30, who has insisted the women in the video attacked him first and that he acted in self-defense, faces up to 30 months in jail and $10,000 in fines if convicted as charged. He is due back in court March 15 for a pretrial hearing.

Oroojian was seen on cell phone video that was widely circulated online — including by the Los Angeles Police Department — punching two women on a sidewalk as a crowd gathered around them on Jan. 26 near Sixth and Spring streets. Both women were knocked to the ground during the brawl, after which Oroojian is seen running from the scene.

One of the women involved in the fight told NBC4 the assailant was arguing with a vendor over the $6 cost of a hot dog. When the confrontation escalated, another vendor offered the man a free hot dog, but the man continued arguing, prompting the two women to intervene.

“Me and my friend said something like, ‘Just leave,”’ the unidentified woman said.

The father of one of the women posted the video on Facebook and expressed outrage that nobody tried to help them.

“For a crowd of men to sit back and not only watch, but film two girls get beat on by a 6 (foot) 250 lb. guy. My family and I are disgusted to say the least,” the man wrote.

He also said once the fight ended and the women were on the ground, “Nobody even tried to help them up or ask if they were OK. Instead, the people standing around laughed and cheered as if the sight of two small girls getting beat on by a huge 250 lb. man was a sight of entertainment. One of the people watching was a bouncer of the bar this occurred in front of.”

Oroojian surrendered to police Jan. 29, after the video went viral and the LAPD posted it on the agency’s social media accounts in search of the man depicted in it.

He told NBC4 in subsequent interviews that the video does not show the entire confrontation. He insisted he was protecting himself from the women, who cursed and attacked him.

“The last thing I want is to get involved in an altercation,” said Arka Oroojian, 30. “But they kept attacking me.”

He said he was upset about the quality of a hot dog he had just purchased from a vendor when the women went after him.

“The woman that was cussing me out spits on me, her friend then attacks me, I fall down on the ground, they both start kicking me,” Oroojian said. “If you look at the video, it literally shows them coming towards me. I was just defending myself. I’m a really big person, the last thing I want to do is fight.”

Oroojian said he wanted people to know his side of what happened and to defend himself from attacks on social media.

“The truth is, I was just defending myself, that’s all I was doing,” he said. “I hope people can hear this because they’re crucifying me (on social media).”

A man claiming to have witnessed the brawl told local stations the women were to blame for the fight.

“There’s two sides to every story and those two women started that,” the witness, identified only as Stewart, told the station.

He said the women called the man derogatory names before the scuffle began.

“They started punching on him first,” Stewart said. “Once they punched on him first, jumping on his back, then he defended himself by counterpunching these women and things like that. So the video caught only the second glimpse of the story.”

In a previous report, NBC4 reached out to the women in the video, who did not respond to requests for comment on Oroojian’s assertion that they attacked him.

He previously has worked security, and four years ago recorded a music video. He said he is taking time off work to deal with the situation.