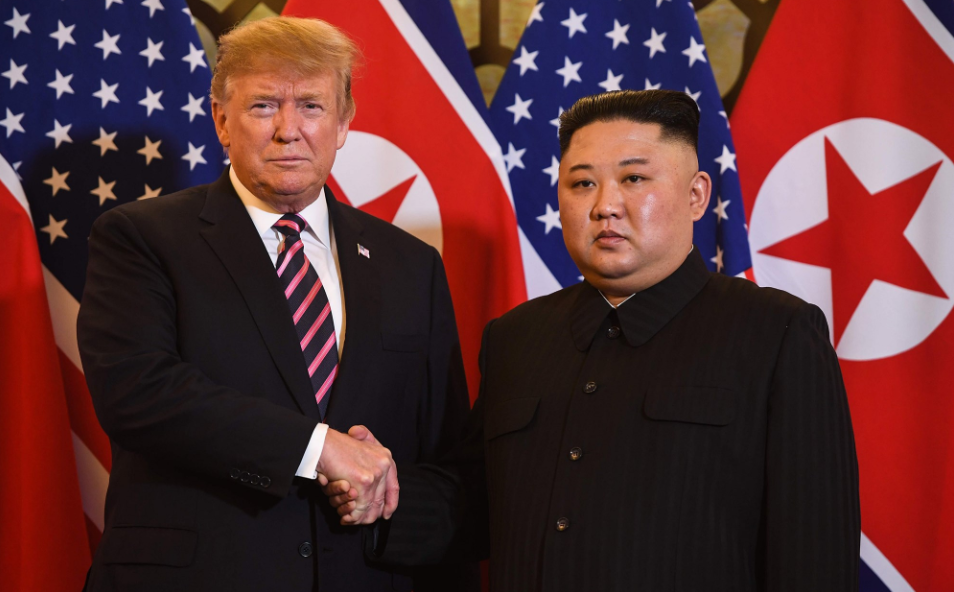 “Sometimes you have to walk and I think that was one of these times,” Trump said at a press conference that was moved forward by almost two hours after the talks collapsed.

He added: “We had some options. At this time we decided not to do any of the options. We’ll see where that goes.”

The president indicated that the discussions stalled due to Kim’s demand that all sanctions be lifted in exchange for concessions on Pyongyang’s nuclear weapons program.

“We couldn’t do that,” Trump said. “They were willing to give us areas but not the ones we wanted.”

The summit ended with a handshake, according to Trump who characterized the talks as “very friendly.”

“We didn’t get all the way. We asked him to do more, he was unprepared to that.”

Trump said Kim has a “certain vision, it’s not exactly our vision but it’s a lot closer than it was a year ago.”

Secretary of State Mike Pompeo told the news conference that he hopes a deal will be reached “in the weeks ahead.”

He added: “We didn’t get all the way. We asked him to do more, he was unprepared to that. I’m still optimistic.”

The president also touched on Michael Cohen’s scathing congressional testimony Wednesday, saying that his former personal lawyer and fixer hadn’t lied about everything.

Earlier, White House press secretary Sarah Sanders released a statement confirming that no agreement had been reached, but the “respective teams look forward to meeting in the future.”

While Trump has said he was not in a hurry to make a comprehensive pact with Kim, the president touted a “very strong partnership” with the North Korean leader before departing Vietnam for Washington empty-handed.

The president also said that Kim had pledged that “testing will not start” of rockets or missiles “or anything having to do with nuclear.”

The apparent breakdown in talks is sure to come as a relief to many North Korea experts — including some Democratic and Republican lawmakers — who worried Trump was ready to make concessions to Kim without securing a firm and verifiable disarmament commitment from the dictator.

Earlier Thursday, NBC News first reported that U.S. officials entered the summit having dropped their demand that Kim give a full accounting of his nuclear weapons and ballistic missiles program.

In rare remarks to Western reporters before the summit was abbreviated, Kim, who spoke through an interpreter, said that he was willing to consider “denuclearizing.”

“If I’m not willing to do that, I wouldn’t be here right now,” Kim said as he sat across the negotiating table from Trump.

But the term has had ambiguous meaning in U.S. talks with North Korea.

Trump himself emphasized repeatedly Thursday that he was in “no rush” to get a comprehensive agreement with Kim, playing down expectations for a full nuclear disarmament pact.

Trump praised Kim for discontinuing missile launches after their first summit in Singapore last year. “We don’t want the testing. And we’ve developed something very special with respect to that.”

Kim said during his opening remarks in Hanoi that skeptics of the relationship would be watching closely and see the two leaders “side by side as if they’re watching a fancy movie.”

Kim and Trump had a one-on-one session in the morning, followed by a meeting with a larger group of officials from both sides. But everything fell apart around the lunch hour.

The two leaders had a number of other issues to discuss, including a possible declaration of the end of the nearly 70-year-old Korean War, the eventual removal of U.S. forces from the Korean Peninsula, and the lifting of the crippling American and international economic sanctions designed to force Pyongyang to give up its weapons programs.

But it is the full, verifiable disarmament of North Korea’s nuclear program that the American side ultimately wants.

Before the summit’s unexpected ending, Kim was asked whether he was confident he could strike a deal with Trump.

“It’s too early to say,” Kim replied. “I would not say I’m pessimistic.”

Trump said he was willing to take his time — a necessity, it appears, if he is going to eventually persuade Kim to disarm.

“Chairman Kim and myself, we want to do the right deal,” Trump said. “Speed is not important.”