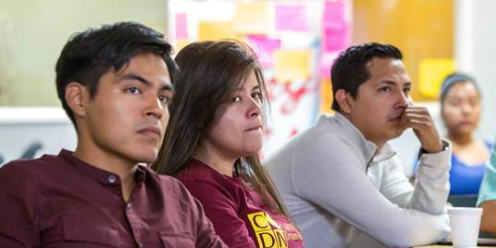 House Democrats introduced a bill Tuesday to provide a path to citizenship for young undocumented immigrants under the Deferred Action for Childhood Arrivals program, and people with other types of temporary immigration protections.

The announcement has given hope to people like Ana Argueta, 55, who has been living and working in the United States as a cleaning custodian for a decade under the federal program known as Temporary Protected Status, or TPS.

TPS is granted to countries ravaged by natural disasters or war and allows citizens of those countries to remain in the U.S. until the situation improves back home. In the past decades, previous administrations from both parties have renewed recipients’ TPS status, but the Trump administration has said it would be ending TPS for a majority of recipients.

Though courts have temporarily blocked the Trump administration from ending TPS, families hope the Democrats’ legislation, if passed, could give them a permanent solution once and for all.

“I think this is good,” Argueta told NBC News in Spanish. “Now, we have to trust that, yes, it will go through.”

Argueta, born in El Salvador, is one of approximately 325,000 people in the U.S. who have TPS status and could eventually become U.S. citizens if the new legislation is eventually passed. Salvadorans were eligible for TPS status in 2001 after an earthquake devastated the country.

The bill also provides a citizenship pathway to thousands of Liberians who have been granted Deferred Enforced Departure, known as DED, which is not considered an immigration status but shields a designated population from deportation.

“I ask lawmakers to please keep us in their conscience, and that they give us immigration reform. It is time. We deserve it. We’ve been contributing for a long time and we’ve been paying our taxes like everybody else,” Argueta, who is also a member of the 32BJ SEIU workers union, said.

Pelosi spoke during a press conference announcing the new legislation.

“We look forward to a strong bipartisan vote to pass this bill,” she said.

If passed, the bill will also bring protections to people like Jessica Garcia, who is one of about 800,000 Dreamers who have DACA status, which allows young undocumented immigrants like her who were brought to the U.S. as children to work and study without fear of deportation.

“This is bill is not about dreams, but about realities,” said García, 21, who is also a member of CHIRLA, an advocacy group that works to defend the human and civil rights of immigrants and refugees. “I’m asking Congress to pass a permanent solution that would permanently protect people like me.”

According to Roybal-Allard, the bill would provide lawful permanent status to immigrants who were brought to the U.S. at age 17 or younger who are employed, in higher education or in the military. It would also give those who already are DACA recipients access to in-state college tuition, federal student aid and a pathway to citizenship.

“My experience as a young person of diverse background makes me a strong, passionate and determined U.S. citizen in waiting,” said García, who considers herself “as American as ‘The Star-Spangled Banner,’ but with a proud Oaxacan heritage.”

“She is an American in every sense but on paper, and today is the day that we’re going to start reversing that,” Velázquez said about García.

Amid a round of applause, Hoyer closed out the press conference saying that “as the majority leader, I am here to pledge that this bill is going to be on the floor.”