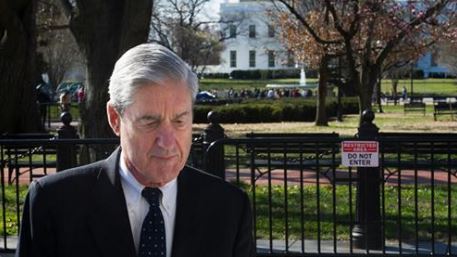 Special counsel Robert Mueller found no evidence President Donald Trump’s campaign “conspired or coordinated” with Russia to influence the 2016 presidential election but reached no conclusion on whether Trump obstructed justice. That brought a hearty claim of vindication from Trump but set the stage for new rounds of political and legal fighting.

The battle began Monday as White House aides and allies blanketed television news broadcasts to trumpet the findings and claim that Trump has been the victim in a probe that never should have started.

White House spokeswoman Sarah Sanders said Trump will let Attorney General William Barr decide whether the special counsel’s Russia report should be publicly released, though she adds that “he’s more than happy for any of this stuff to come out.”

Democrats pointed out that Mueller found evidence for and against obstruction and demanded to see his full report. They insisted that even the summary by the president’s attorney general hardly put him in the clear.

Mueller’s conclusions, summarized by Barr in a four page letter to Congress, represented a victory for Trump on a key question that has hung over his presidency from the start — whether his campaign worked with Russia to defeat Democrat Hillary Clinton.

That was further good news for the president on top of the Justice Department’s earlier announcement that Mueller had wrapped his investigation without new indictments. That could deflate the hopes of Democrats in Congress and on the 2020 campaign trail that incriminating findings from Mueller would hobble the president’s agenda and re-election bid.

But while Mueller was categorical in ruling out criminal collusion, he was more circumspect on presidential obstruction of justice. Despite Trump’s claim of total exoneration, Mueller did not draw a conclusion one way or the other on whether he sought to stifle the Russia investigation through his actions including the firing of former FBI director James Comey.

According to Barr’s summary, Mueller set out “evidence on both sides of the question” and stated that “while this report does not conclude the president committed a crime, it also does not exonerate him.”

Barr, who was nominated by Trump in December, and Deputy Attorney General Rod Rosenstein, who appointed Mueller in May 2017 and oversaw much of his work, went further in Trump’s favor.