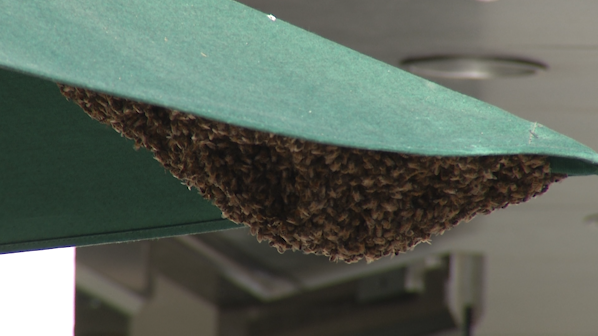 Thousands of Bees Swarm to Starbucks on El Paseo

Starbucks customers on El Paseo got more than a coffee buzz Monday afternoon. A massive swarm of bees overtook an umbrella outside causing a closure of the patio. Starbucks’ next door neighbor, El Paseo Jewelers, also closed an hour and a half early, too.

“There was a lot of buzz over there,” Raju Mehta, manager of El Paseo Jewelers, said. “More than thousands and thousands of bees were making buzz.”

The swarm continued for hours. Mehta said the situation should have been taken care of quicker. One of his employees is allergic to bees.

“Someone could have got really sick by a bee sting,” he said.

An influx in bees and butterflies can be associated with Spring and flowers blooming, Lorie Prater, office manager of Powerful Pest Management, said.

“One possibility is that the queen bee was scouting out for a new hive and the bees were following her to protect her,” Prater said. “They were gathering with her.”

She said the huddled under the umbrella due to the “standing air.”

Jack Mauceri, a long-time Starbucks customer, said the bees won’t keep him from getting his morning coffee everyday.

A small group of bees huddled under the same umbrella on Tuesday afternoon. Prater said if you see a large group of bees that seem to be sticking around, call pest control to be safe.