North Korea no longer wants Secretary of State Mike Pompeo involved in nuclear talks, calling for someone who “is more careful and mature in communicating,” state media said Thursday.

The official KCNA news agency also quoted Kwon Jong Gun, a senior official at the North’s Foreign Ministry, as saying “no one can predict” the situation on the Korean Peninsula if the U.S. does not abandon the “root cause” that compelled Pyongyang to develop its nuclear program, without elaborating.

KCNA quoted Kwon, who is in charge of U.S. affairs, as saying the Hanoi summit which brought together North Korean leader Kim Jong Un and President Donald Trump, showed that talks could go wrong “whenever Pompeo pokes his nose in.”

Kwon added: “I am afraid that, if Pompeo engages in the talks again, the table will be lousy once again and the talks will become entangled.”

The Foreign Ministry also accused Pompeo of playing down the significance of comments by Kim, who said last week that Washington has until the end of the year to offer mutually acceptable terms for an agreement to salvage the high-stakes nuclear diplomacy.

Earlier, North Korea said that it had test-fired a new type of “tactical guided weapon,” its first such test in nearly half a year.

The test, which didn’t appear to be of a banned mid- or long-range ballistic missile that could scuttle negotiations, allows Pyongyang to show its people it is pushing ahead with weapons development while also reassuring domestic military officials worried that diplomacy with Washington signals weakness.

Kim observed the unspecified weapon being fired Wednesday by the Academy of Defense Science, KCNA said.

The North Korean leader was reported to have said “the development of the weapon system serves as an event of very weighty significance in increasing the combat power of the People’s Army.”

NBC News could not independently verify North Korea’s claim, and it wasn’t immediately clear what had been tested. The White House said it was aware of the report and had no comment.

A ballistic missile test would jeopardize the diplomatic talks meant to provide the North with concessions in return for disarmament. Trump said last month that he “would be very disappointed if I saw testing.”

The test comes during an apparent deadlock in nuclear disarmament talks after the failed summit in Hanoi between Kim and Trump earlier this year. Some in Seoul worry that the North will turn back to actions seen as provocative by outsiders as a way to force Washington to drop its hardline negotiating stance and grant the North’s demand for a removal of crushing international sanctions.

A string of increasingly powerful weapons tests in 2017 and Trump’s response of “fire and fury” had many fearing war before the North shifted to diplomacy. 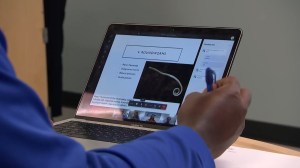